When people think of Vegas, the first thing that comes to mind is the strip. Fortunately, there are a lot of other places to visit off the strip. When we were there we didn’t set foot on the strip. Instead, we filled our time going to a Jump Gym, the Discovery Children’s Museum, and Seaquest, interactive aquarium.

If you want a good deal on passes in Las Vegas check out the Pogo Pass.  The Children’s museum and Seaquest are included here plus many more family, friendly activities that include racing karts, water parks, climbing, trampoline parks, bounce houses and a Lion Habitat.  Literally fun for the whole family!

We really enjoyed using the Pogo Pass – we got a pass for each member of our family, and it enabled us to get access to several venues. It was easy to use, we were able to download the app and manage our tickets and passes all on our phone. We are just at the beginning of our 50 States in 50 Weeks tour, but we are looking forward to using the Pogo Pass again in the other cities later in the year. If you are interested in signing up for Pogo Pass, use our code: SimpleMeetsAdventure to get 60% off! Yeah, you read that right!

I have never been to an interactive aquarium but to see my kids interacting with the stingrays was priceless. They squealed and giggled as the stingrays would swim right up to the side of the tank and come about halfway out of the water. While they were so close all of us had the chance to touch their slippery backs. It was a fun educational experience.

The girls learned about different types of food that fish eat and even had the opportunity to feed sharks and pet iguanas.

This is a three-story kid-fun zone. When we first walked in we walked right into the water discovery. I literally had to drag Saylor out. Her favorite was playing with the balls.

We spent a lot of time on the second level playing in the grocery store, Jamba Juice, mechanic shop and construction area. Blakely even talked me into scurrying down a tube with everyone. It was quite the site with everyone’s coats tied in a ring around my torso and the diaper bag. We made it through though and had a lot of fun! Four hours of fun to be exact! They fell asleep not even five minutes after I buckled them into their carseats. 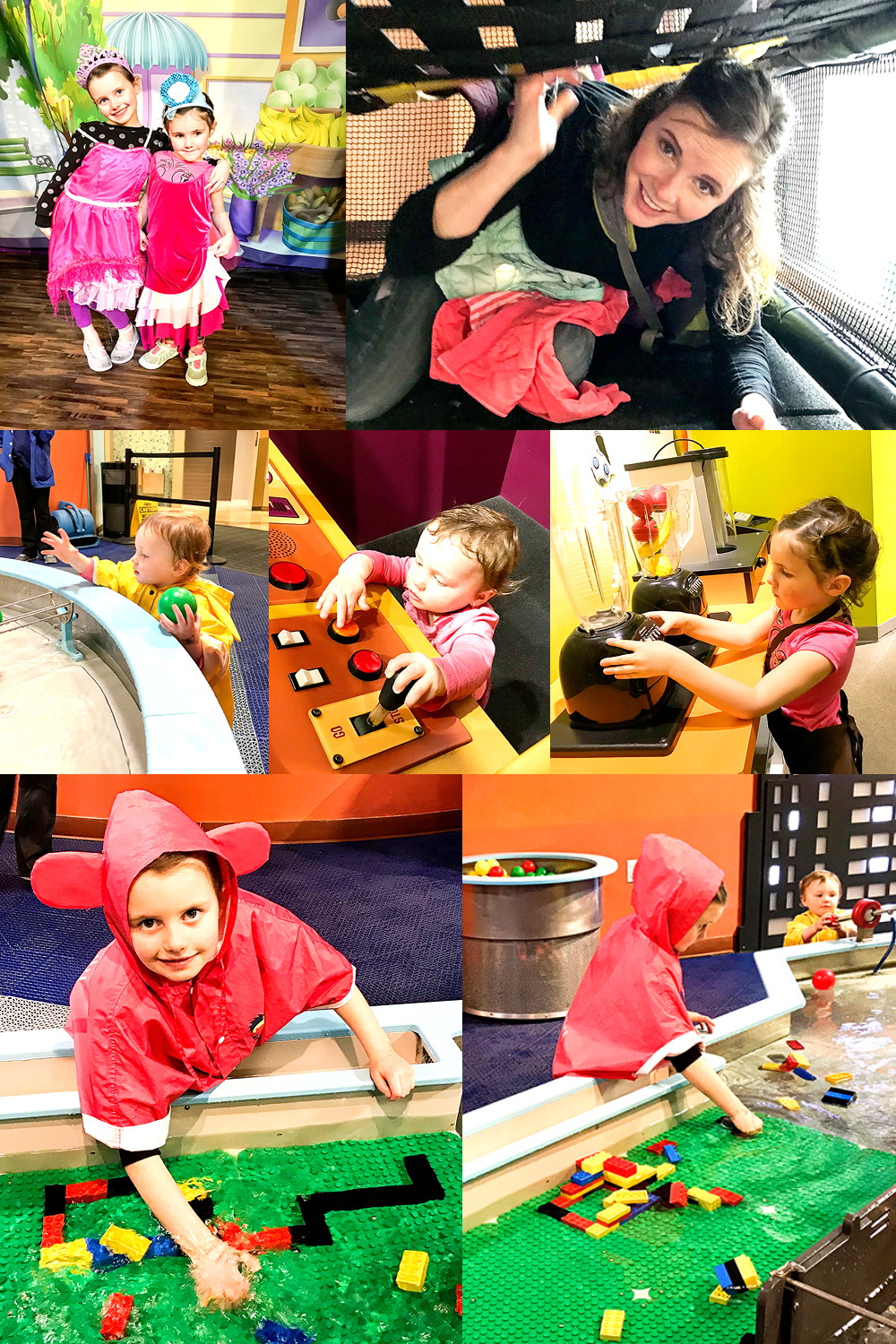 This is no ordinary trampoline park. It had hanging bags, basketball hoops, a stunt area, a ninja warrior course and even a tightrope! We had a blast. Colter and I walked in there thinking we wouldn’t jump. It was Monday so they had a discount when you jumped as a family. So we jumped in!

I actually think Colter had the most fun. He was jumping trying to grab the punching bags, did a back-flip off of a 15-foot ‘cliff’, and tried the ninja warrior obstacles. He was sweating by the end.

My favorite part was the tightrope. My biggest fear is falling and hitting the ground. This goes for anything I do. Skiing, biking, climbing, you get the picture! So when I had the opportunity to fall into a soft foam pit I took the opportunity multiple times.

We had a lot of fun playing dodge-ball. I did have to tell Colter to bring it down a notch when he was firing balls at 100 miles an hour at the girls. He may have won but we tried to gang up on him. Girls vs boys! 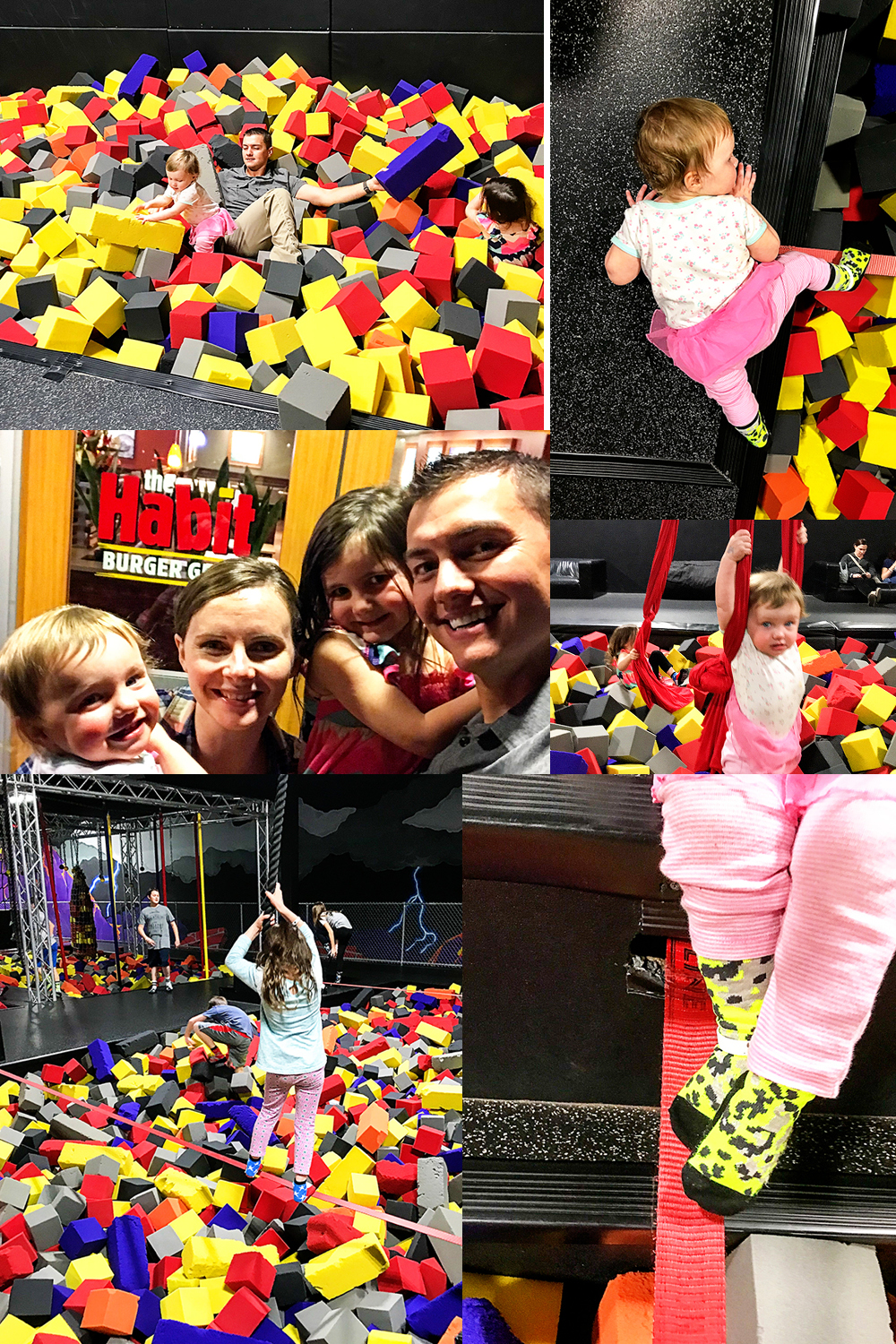