Michigan has a lot to offer.  Since my sister-in-law grew up here, we were given a lot of ideas on what to do while here.  Mackinac Island, any of the sand dunes, The Henry Ford Museums, and the Tulip Festival were only a few of the suggestions.  Learning about the ingenuity and foresight of Henry Ford while watching the intricacy and man/machine power of an actual Ford F-150 being put together was an experience.   As was learning about Holland, Tulips and the Dutch Culture. 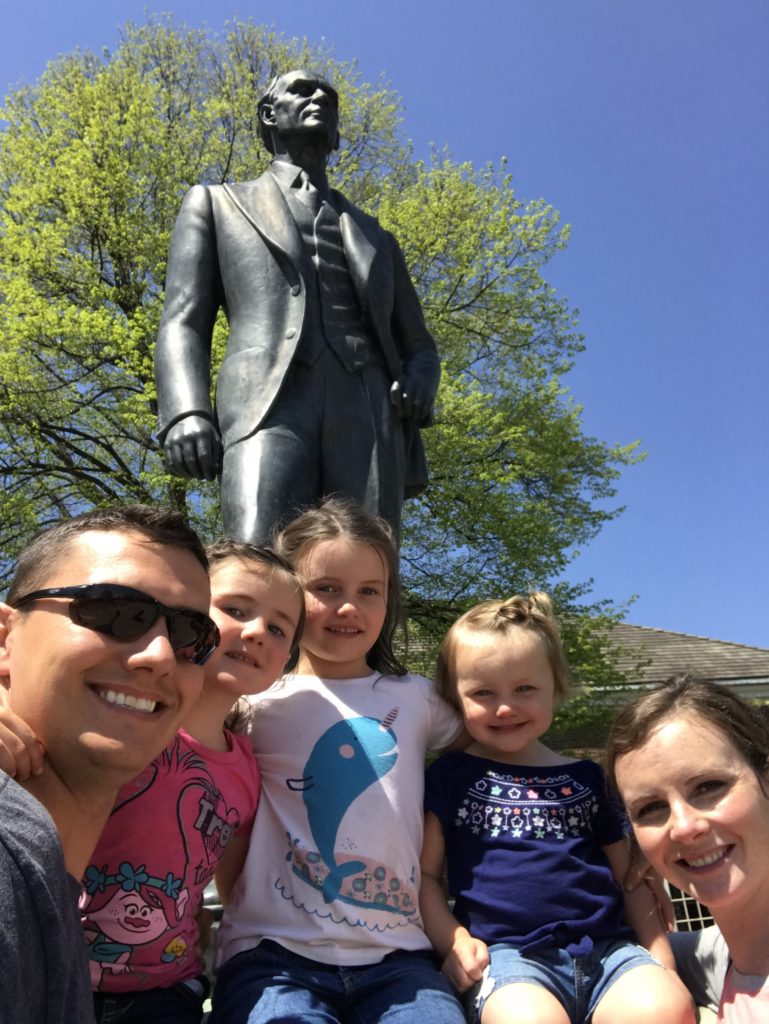 I had no idea what I was getting into when our family went to The Henry Ford.  Most places we have visited has consisted of one major attraction.  Henry Ford wasn’t satisfied with just one attribute to him, so he needed multiple attractions.  The Henry Ford Consists of three separate attractions on the property.  The Rouge Factory Tour, Greenfield Village, and the Museum.

You can choose to go to all three and get a discounted package or you can choose to only go on one tour.  Initially, we wanted to make it to all three attractions but only had time for two attractions in our one day we spent in Dearborn, MI.  Colter was interested in how they put together a F-150 and we had been told that Greenfield Village would be a lot of fun for the girls.

The Rouge Factory is where you can see first hand how a Ford F-150 pickup truck is put together.  A bus takes you to the factory.  Once at the factory you have stations you can choose to go to.  There are two videos, a self-guided walking tour of the factory, and a level where you can view their green roof!

Our first stop was seeing the actual trucks being put together.  The guides wanted us to go here first because the factory workers took a lunch break at 12:30.

To view the process of putting trucks together we took the elevator up to the second floor, walked through a hallway and into the factory.  It was amazing!  I saw a truck frame without anything inside.  No wheel, no console, no seats.  Just the frame.

As you watched down the line there was a worker installing consoles with a machine.  This machine would grab a console from the storage place, rotate around, slip and bend exactly where the console would fit in the truck!  It was pretty neat.

As we continued on the self-guided factory tour we saw lights being installed, tailgates secured and the finished truck.  You really just have to go to see it for yourself.  I can’t even do it justice describing what we saw. 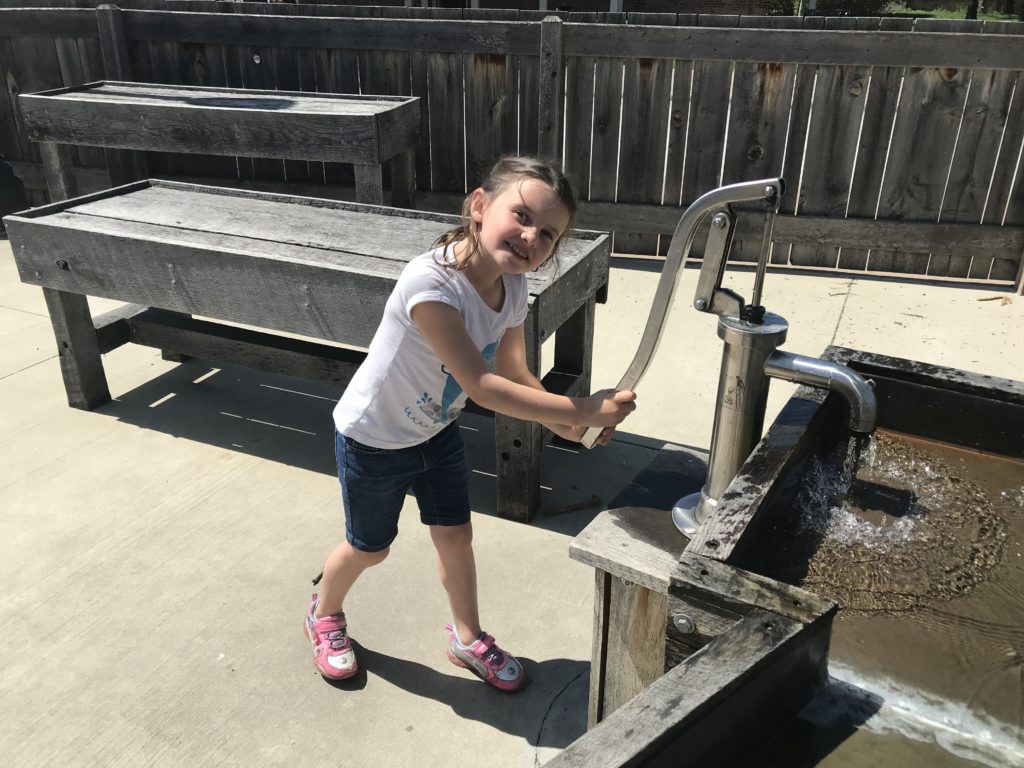 Henry Ford loved ingenuity.  Greenfield Village is a collection of buildings and houses of people who really helped shape America to what it is today.  There are farms, his boyhood home, the workshop of Thomas Edison where he invented the light bulb, houses of poets, and a train station.

Friendly faces greet you in every building and are eager to share the history and what happened there.  Fun artifacts are preserved and I felt like I was taken back in time.  In the Thomas Edison house, there is a chair, blocked off, secured to the floor, where Thomas Edison himself sat after the building was finished at Greenfield Village.  Pretty neat.

Since the village covers about 80 acres there is a lot to cover in your time there.  Thus, there are multiple modes of transportation to get around if you would rather not walk.  A train covers the outskirts, and to view the village from street to street you can choose a Model-T automobile ride, or a horse and buggy ride.  Each is an additional charge or I believe you can purchase a ticket that would allow you to experience all three.  We chose to do the Model-T.  The girls loved it but I think Colter and I enjoyed it the most.

A village would not be a village without entertainment for children.  Fortunately, there is a large play area with a sandpit, climbing structures, and a large slide.  Blakely was attracted to the old-fashioned hand water pumps.  She thought that was pretty neat.  Saylor just wanted to take her shoes off in the sand and we kept getting in trouble from the workers because kids are supposed to leave their shoes on.  Tessa loved the climbing ropes that lead up to the water-tower slide.

Hamburgers and ice-cream were our treats between adventures in the village.  We enjoyed eating our ice-cream while watching the carousel go round and round.

If we were to do Greenfield Village again, I would spend a whole day just for the village.  We crammed two of the three tours into one day.  Half for the Rouge tour and half for Greenfield Village and did not have time to tour the museum, which is a separate tour. 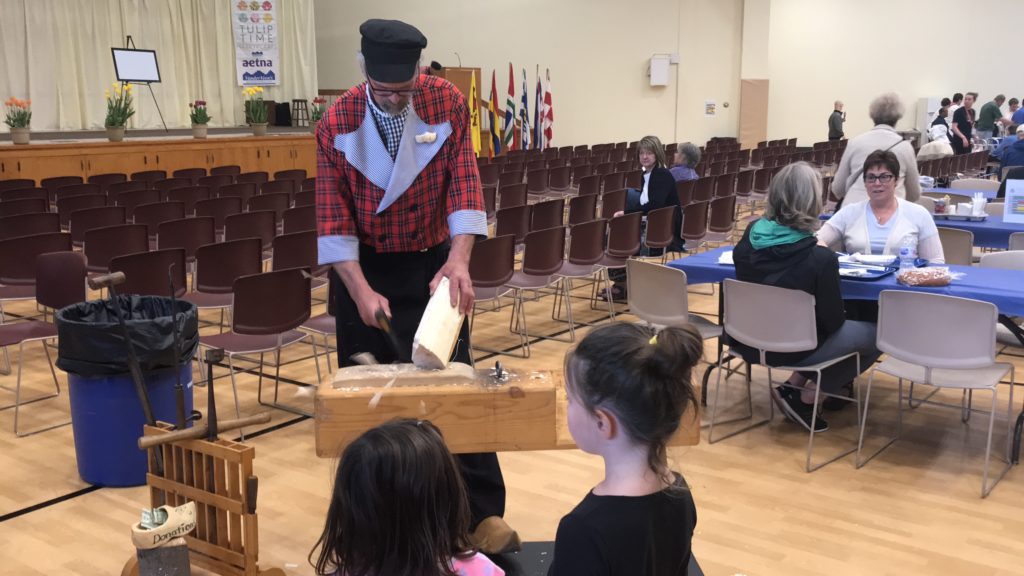 Since we were in Michigan in the spring we were told the Tulip Festival in Holland was a must see.  So we went and saw!  My expectations may have been a little too high but I learned a lot and we all had fun.

When I think of tulip festival, I think of fields and fields of tulips with houses and yards bursting at the fences with colorful flowers at every turn.  The path we took to get to the state park, where we were going to park the RV, was not what I had imagined.  I am not even sure if we saw one tulip.

Fortunately the next day we did see some tulips as we attended the festivities.  Still, no fields and fields of tulips, because we did not go to the windmill, but we learned a lot about the Dutch culture.  We ate Dutch food, listened to an accordion, saw wooden shoes be hand carved and even tried some shoes on ourselves.  If we would have had more room, it would have been fun to buy some for the girls as dress-ups.

Some interesting facts about the shoes.

Visiting the festival made me want to go to the Netherlands and experience Holland first hand.  The tulip festival was great and the girls loved seeing the little kids dance in their shoes and outfits.

We had a great time in Michigan and really enjoyed The Henry Ford museums and visiting the Tulip Festival in Holland.  If we would’ve had more time and if the weather would have been better, we would have gone north to Mackinac Island.  Maybe next time!