It seems as if we blinked and we had gone through North Dakota.  We had a full week planned for our 50 states in 50 weeks road trip but a change in plans left us short on time.  The day and a half we were in North Dakota we covered a lot of ground and were able to visit the Fargo Air Museum, the National Buffalo Museum and have a short break in Bismark.   We even washed the RV for a second time on our year long trip!

This city was our first stop, right on the border, in eastern North Dakota.  Our choice to stay here was due to a free night at a Harvest Host destination, the Fargo Air Museum.

We arrived in Fargo around four pm and decided it would be a good idea to wash the RV at a Truck Wash.  The last time we washed it was by hand at Corney Lake in Louisiana. Going in we had no idea if we washed the RV ourselves or if there was an automatic system.   It was an experience! There were three-four guys on each side with pressure washer wands spraying down the RV. We were out in 15 minutes. Voila! Squeaky clean.

The Air Museum was closed by the time we pulled it but it was early enough that Colter decided to take the girls for a walk which turned into swimming at the neighboring hotel.  This was perfect. While they were gone I was able to complete some continuing education. They swam for a couple of hours and came back exhausted. We put them right to bed.

It was on my run the next morning that I thought it would be fun to do a triathlon with my sister in Wyoming.  That would mean we would need to put the pedal to the medal and just drive through North and South Dakota. I planned it out.  The one thing I didn’t plan for though was registration being closed. We decided it would be fun to go cheer her on anyway that next weekend. 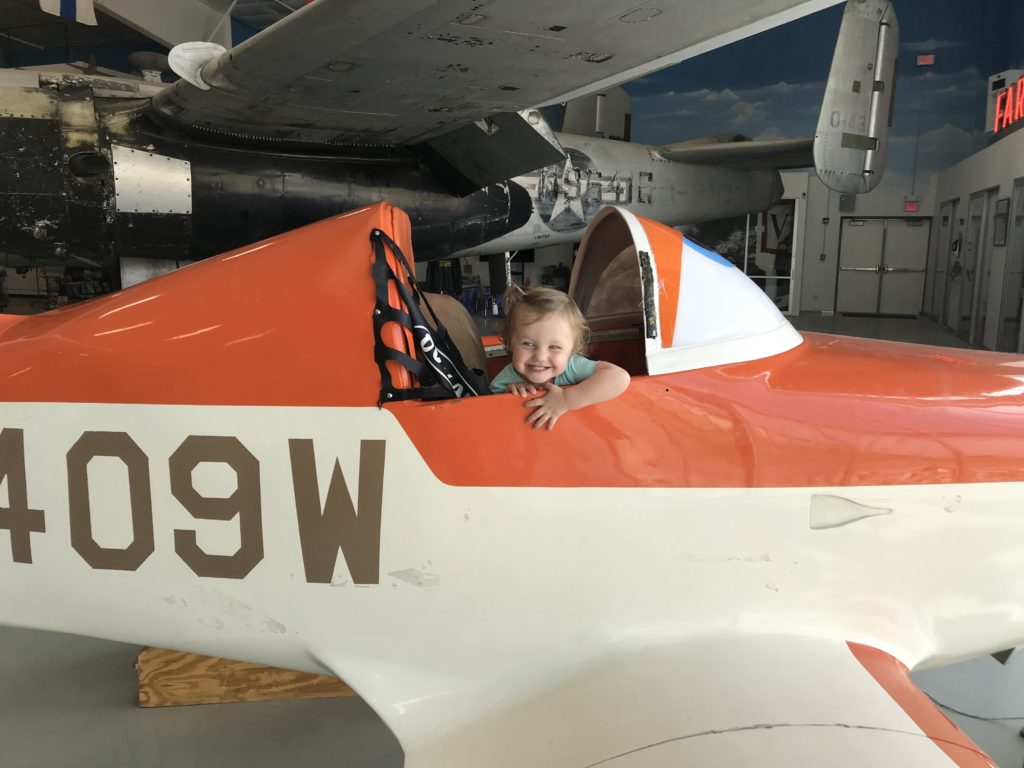 We took the morning to see the Fargo Air Museum.  The museum consists of two large airplane hangars full of airplanes and history.  The girls loved getting in Dusty, the airplane from Disney’s Planes. Colter even gave them a crash course in flying.

We watched movies, took pictures of airplanes and made paper airplanes. 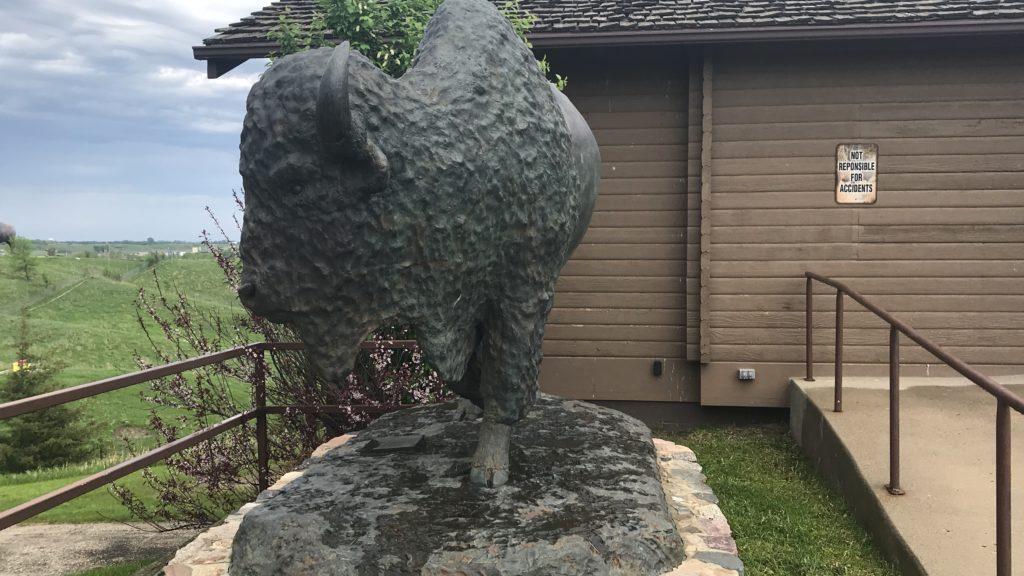 One reason we came here was to view the ginormous buffalo statue on the property.  While we were there we also wanted to go through the museum. They have a white buffalo displayed here.  White buffaloes are a rare occurrence and are very sacred to the native peoples. The audio tour tells her history then leads you to her resting place in the museum.

In the museum, we saw a buffalo skeleton.  One thing I learned was their hump on the back is made from a separate ‘rib like cage’ coming up from the spine.  I always assumed the spine was curved to create the shape.

As we went through the museum the girls were ecstatic when they found the kids area in a hallway.  They played and played and could have played for hours more. This gave Colter and I a chance to really enjoy reading the signs and the opportunity to enjoy the Native American artifacts.

The gift shop was incredible.  They had beautiful pieces of pottery and some creative wooden signs.  If we would have had more room in the RV or a house, I probably would have broken down and purchased a couple pieces.

The large buffalo outside is huge!  So big that you can’t even take a good selfie with it!  Definitely worth stopping for. In the summer the whole little town is open so you can shop and feel like you are in the wild west.  We were too early in the season and too late in the day to experience the town. 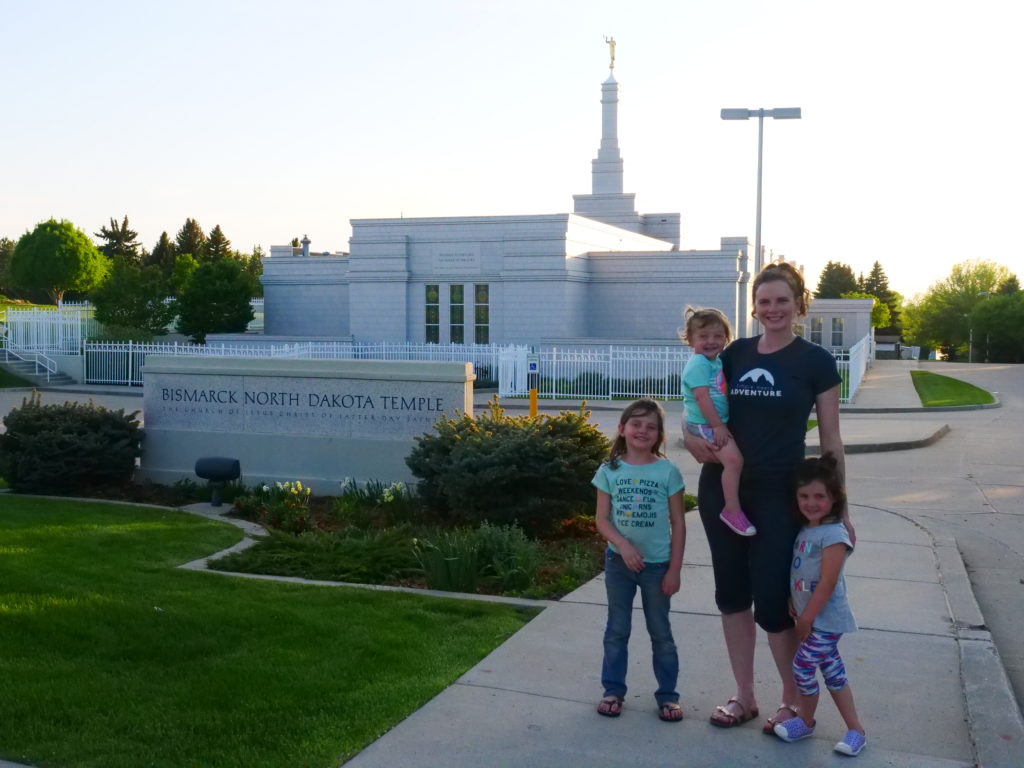 We made a quick stop in Bismark to fuel up and see The Church of Jesus Christ Temple.  The temple was closed but we took the opportunity to walk around the grounds. This would be our last stop in North Dakota before we drove to South Dakota.

Even though our time was short in North Dakota, we felt like we utilized every hour we could.  Initially, we also wanted to go spend time in the Theodore Roosevelt National Park and do some biking and hiking on the Maah Daah Hey Trail and stop by the Knife River Indian Villages where Sacajawea once lived before she joined Lewis and Clark.  These stops are still on our to-do list.

North Dakota,  we will be back!