From Elvis to the Grand Ol, Opry, I feel we got a pretty good taste of Tennessee.  Tennessee was actually one of my anticipated stops on our route because of my childhood dream of becoming a country star.  Fortunately, we were able to hit the two main music cities in Tennessee!  Memphis and Nashville and here is what we did.

Memphis was a must stop on our list because of Elvis.  He is definitely ‘The King.’  Touring his residence where he lived when he was alive was truly eye-opening.  The way he lived with a special jungle themed room, the yellow TV room downstairs with three TVs, and his own racquetball court with a piano in the building was a sight to see.

Our whole family really loved the tablet with headphones that was handed out while waiting for the bus to arrive.  Blakely and Tessa swiped through the sections quickly but loved watching the videos of Elvis riding his horse and his home movies.  These tablets allowed you to listen at your own pace as you walked through the house and house property tour.

Blakely, Tessa, and Saylor loved looking into the pasture at the horses and Colter liked looking at the receipts in the museum portion of many of Elvis Presley’s expenditures.  My favorite part of the tour was just being able to learn more about his life and how he interacted with those he was close to.  One very interesting part of his life was that he never allowed any guests upstairs in his house.  Upstairs was his space where he could relax and not put on a show.

On the Graceland tour, we were also able to walk by Elvis’ grave and the graves of other family members.  A specific section of his property is filled with reverence for those who want to pay respect to his memory.  Headstones, a fountain, and statues decorate the circle where the bodies lay to rest.

We toured the other Elvis buildings at Graceland also.  One warehouse displays the vehicles he owned.  Another displays his boats and motorcycles.  A different one displays his military service and one warehouse has testimonials and artifacts of performers who have been influenced by Elvis.  It was fun to see a Toby Keith Guitar at the end of our day.

A theater (which we didn’t make it to) shows many movies that Elvis played a role in and there is a ‘Diner’ on the property where you can grab lunch.  We chose a pizza and some hamburgers which were pretty good.  The diner is more cafeteria, choose your own food, style than sit down and order.  Just don’t forget to check out the airplanes.  You don’t want to miss the gold-plated sinks and buckles.  Elvis sure knew how to fly in style and did not spare any expense.

We spent a whole day here and enjoyed every minute of it!

We found the Pink Palace as part of our ASTC passport and had to go and check it out.  I was hoping the museum would pass for a children’s hands-on museum for the girls.  The museum was pretty spectacular even though it was not hands on.  There were a lot of different sections in the museum.  We learned about bones, rocks, gems, dinosaurs, ancient America, and early America.  The ‘real life’ T-Rex scared the girls and they clenched to my leg as we peeked around a nearby display to see the commotion.

We couldn’t leave Memphis without checking out another children’s museum.  Every museum is unique but this one had a carousel.  The girls loved it to say the least.  They also really liked the craft section where they made rainbows.  We were all tired at the end of the day and enjoyed every section of that museum. 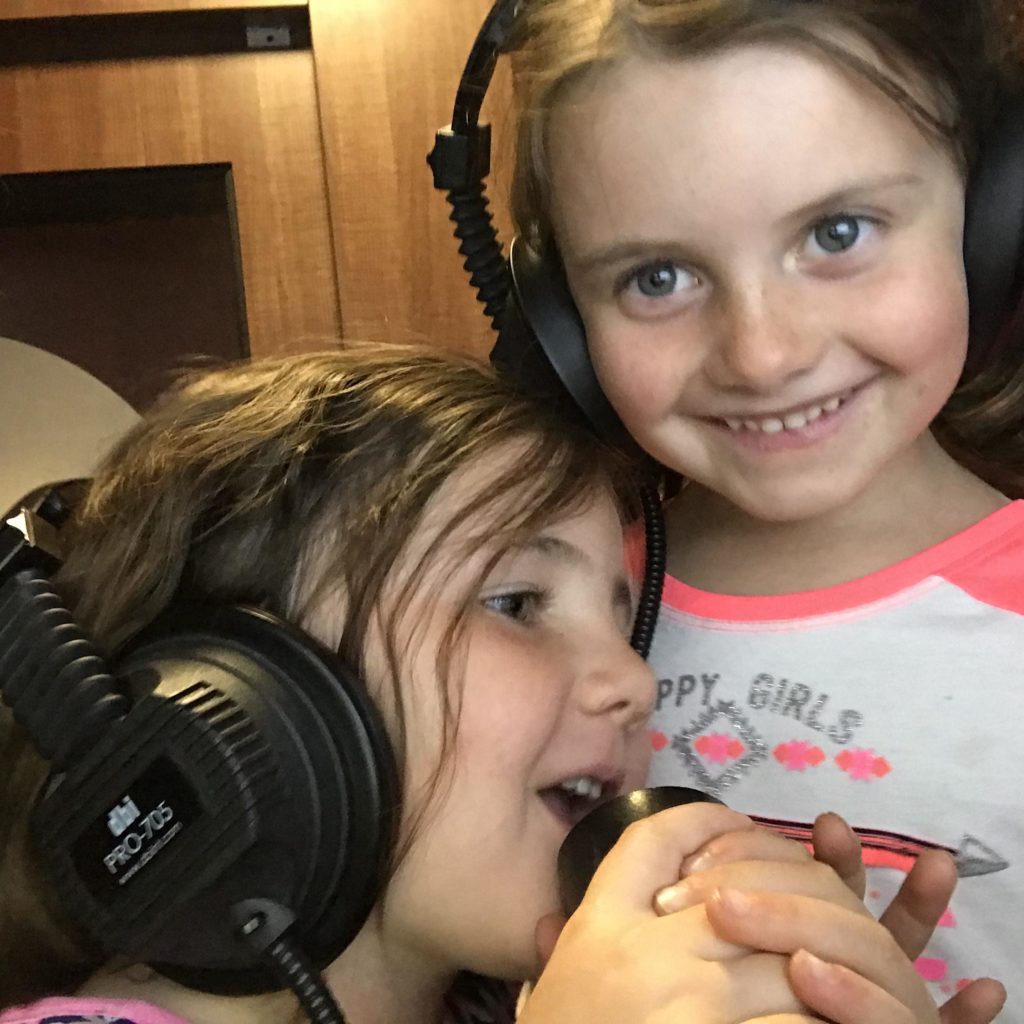 Driving a swather a (big machine that cuts alf-alfa) on the farm while growing up I got bored.  The one thing that kept me entertained was belting out the country songs on the radio.  I love country music and the Country Music Hall of Fame did not disappoint.

There are some incredible musicians!  Loretta Lynn,  Shania Twain, Tim McGraw and Faith Hill were the big showcases.  Blakely, Tessa, and Saylor really like the Taylor Swift bus where they could sing and record.  Taylor’s shiny guitar was also an eye-catcher.

At the end of the tour, I couldn’t resist going into the store.  That was a mistake.  Blakely saw a ukulele and wanted her own ‘little guitar.’  Blakely and Tessa played around with the uke’s while I looked around.  When the time came to go, those two little heart-breakers talked me into getting the ukulele.  I do not regret that purchase one bit.  Blakely is actually learning, “Twinkle, twinkle, little star.”

Colter came to pick us up after the museum because he needed to work and Saylor was asleep.  He ended up parking in a taxi loading zone and we almost pulled away when…Blakely said I needed to sing and yodel on the street.  I almost got away without performing.  You see, Colter had this idea in Arkansas that it would be fun to get me on the streets of Nashville with my guitar and yodel.

The goal was to have maybe five songs I could play by heart but with traveling and taking care of RV and kids I had not taken the time to practice.  It was going to be a quick performance, so I hurried around to the trunk to grab my guitar.  If I were prepared, I would have pre-tuned the guitar but I had not planned that in advance so I had to tune the guitar in the trunk.  There were some comments of passerby saying, “Sounds good.”  Little did they know what was coming.

When the guitar was tuned I went to the street, kneeled down, because I didn’t have a strap, and prepared myself to sing and play.  The ukulele actually came in handy at this point.  You see, Blakely didn’t skip a beat and she grabbed that uke, stood by my side and attempted to play right along.

First kiss was the first number, then it came to Cowboy’s Sweetheart and the yodel.  I had turned a few heads on the first song but when I started to yodel and the looks of amazement that came my way was a rush!  It was actually quite fun!  I even sang both songs again just for kicks!

I am grateful for Colter who puts me slightly out of my comfort zone every once in a while.

The day we went to tour the house that made country music famous, the Grand Ol Opry, the tours were closed.  The National High School Show Choir competition was being held at the venue.  We were not too sad because it saved us some money but we still were able to get some great photos of the outside.  I hear the way to go is purchasing tickets for an actual performance!

Memphis and Nashville were beautiful notes on our journey! We stepped foot on Elvis’ property and stepped foot where musicians have performed their hearts out!  The girls had a blast at the museums and it was really fun to see Blakely recognize Elvis from Graceland in the Country Music Hall of Fame and learn to play the ukulele.