The only stop we made in South Dakota was Mt Rushmore. This historic site is incredible! This was also one of the only times on our 50 states in 50 weeks tour across the United States that I had my feeling hurt by a grumpy guy. 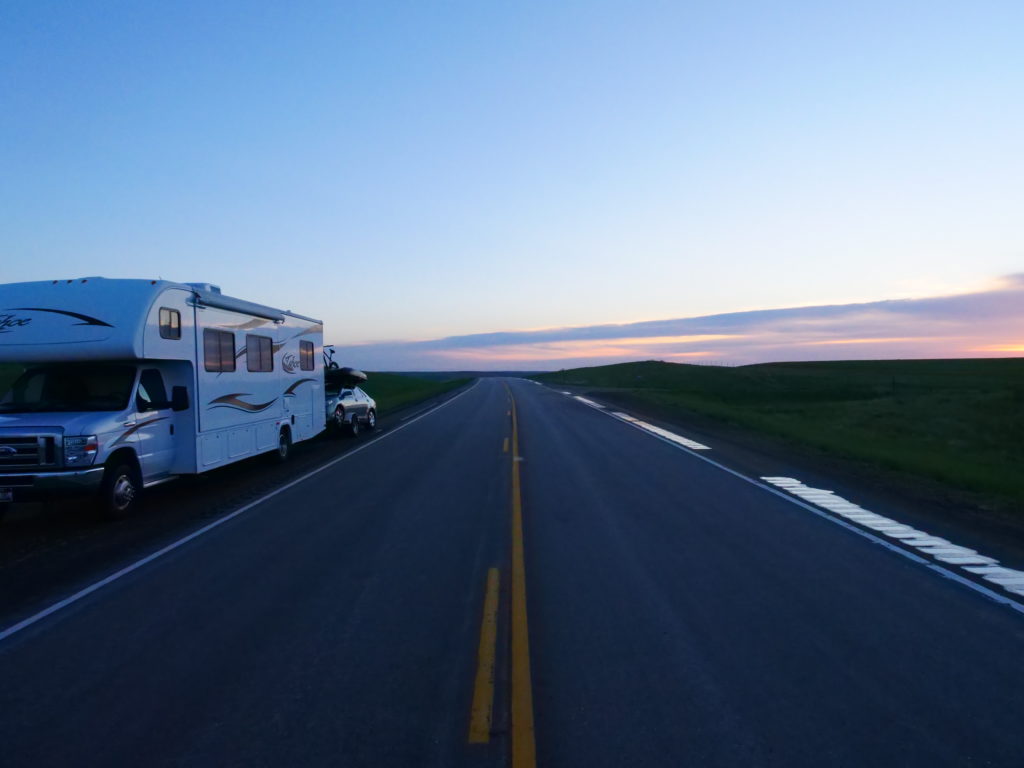 We entered South Dakota on a late night drive from North Dakota. The girls had fallen asleep on the drive and I was so tired I went back on the bed to sleep while Colter was driving. We were in the middle of nowhere in South Dakota. All he saw was wide open fields and the storm that was rolling in. He finally got tired and pulled over.

When he came back to come to bed, I sleepily asked him where we were. He mentioned a pull-out on the side of the highway and we fell asleep. The RV shaking fiercely woke me up slightly and I heard a truck zoom by the side of the RV. Ok, we were just off the highway, no big deal. It wasn’t until the next morning when I realized how barely off the road we were.

Colter took pictures the next morning and we were maybe a foot off the road. No wonder the RV shook like there was an earthquake when semi-trucks rolled by. On the bright side, he pulled over when he was tired!

The sunrise was beautiful! Open fields, a two-lane highway and no civilization in sight. This is the west. To make things better, we drove up on a cattle drive on our way to Mt Rushmore. It was starting to feel like home. 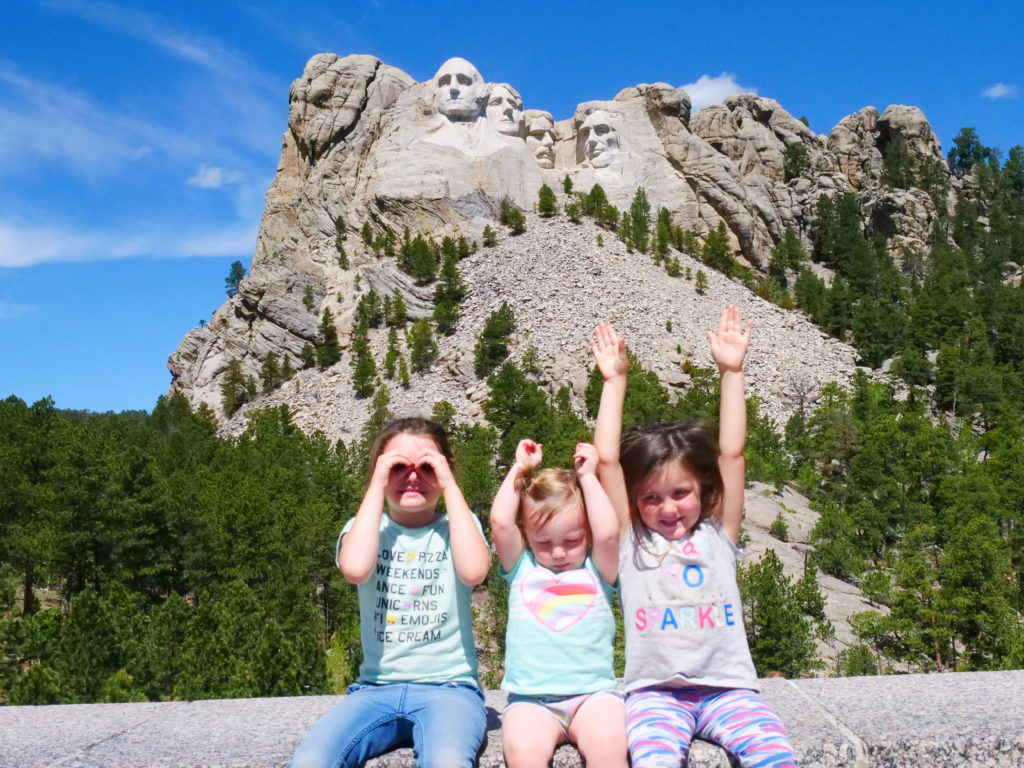 We arrived at Mt Rushmore early, got our snacks, lunch, and hats and we were on our way. Walking through all 50 state flags to get to the viewing area of Mt Rushmore was really neat. I kept saying in my head, I have been to that one, that one. I tried showing the girls but they were like, “Ok mom.”

Our first stop was to go downstairs to the park reception desk to pick up our Junior Ranger packets. I love that the National Park System has programs in place to help the kids, and me, learn more about the parks. Blakely loves the ‘homework’ and the badge of completion at the end! The coolest ones are the wooden Junior Ranger badges.

This is where grumpy gills comes into the story. After we hiked up to the base of the mountain and saw the sculptures as close as we could we went inside to view the museum. Here we were able to see how this impossible feat of carving faces into a mountain came to be a reality. 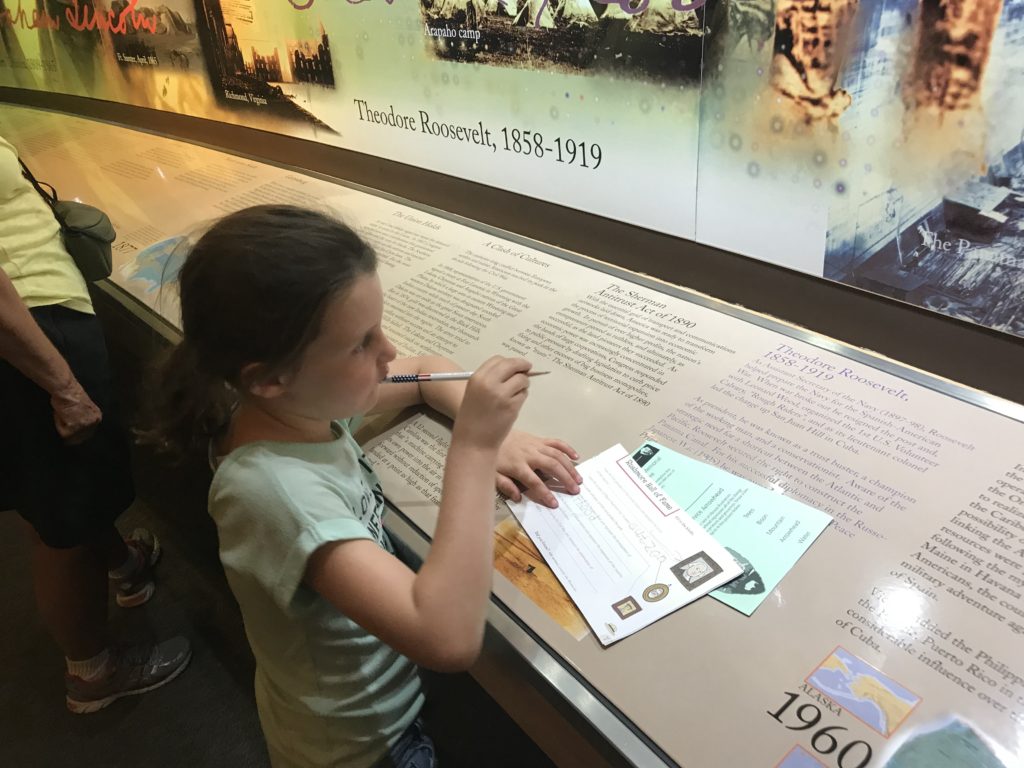 The displays are incredible and in the museum, there is a hall where you can see a timeline of what had happened in the United States and why Gutzon Borglum chose the faces of these four men to carve. George Washington, first president, Thomas Jefferson, the Declaration of Independence, Abraham Lincoln, freed the slaves, and Teddy Roosevelt, started the national park system. These were all significant events in our nation’s history.

It was while we were looking at this timeline that Blakely needed to copy the names of the presidents to complete her Junior Ranger packet. There weren’t a lot of people so I thought it would be fine to use the display as a table while she wrote the names down. I would point to the name, read the description about the president and she would then copy the name down in her book.

There was one time I looked around to see if we were preventing anyone from seeing the timeline. There were a couple of women at the start of the timeline, we were about ¾ of the way down the timeline, a gentleman near the end of the timeline and a guy standing in front of the dedicatory flag by the back wall. We were good! We could stay here and do the last required page of matching tools that were used on the project. This took maybe two minutes.

When we finished and walked away, the guy standing back at the flag commented on our way past. “It’s about time,” he muttered in an annoyed, deep tone. I don’t know why this pulled a heart string but I was hurt and started to cry.

Blakely, Tessa, Saylor and I walked around the corner, I regrouped and decided it would be better if we finished Tessa’s book outside. And the story gets better from here.

To my unbelief, guess who walked out maybe three minutes behind us and sat down by a lady sitting on the benches outside? Grumpy pants. Then for some insane reason, the thought crossed my mind that I should go apologize to him. Isn’t that the nice thing to do? Apparently, I offended him.

I had just finished listening to the 5 Second Rulebook by Mel Robbins. Dang. Five, four, three, two, one here it goes. Stay here I told the girls and then walked over to apologize.

It didn’t work. If anything it made him more furious. You can’t reason with some people and he was out to tell me that I was inconsiderate and my kids would grow up to be just as inconsiderate as me. Looking back on this, I laugh now but it got to me. I wasn’t even going to tell Colter when I got back to the RV, but I eventually did because I felt it would fester inside me if I didn’t get it out.

I figure everyone has their bad days and maybe this was one of those bad days for grumpy guy. Who knows, maybe he didn’t even want to be there. It does make my heart happy to think he went home and appreciated the apology. 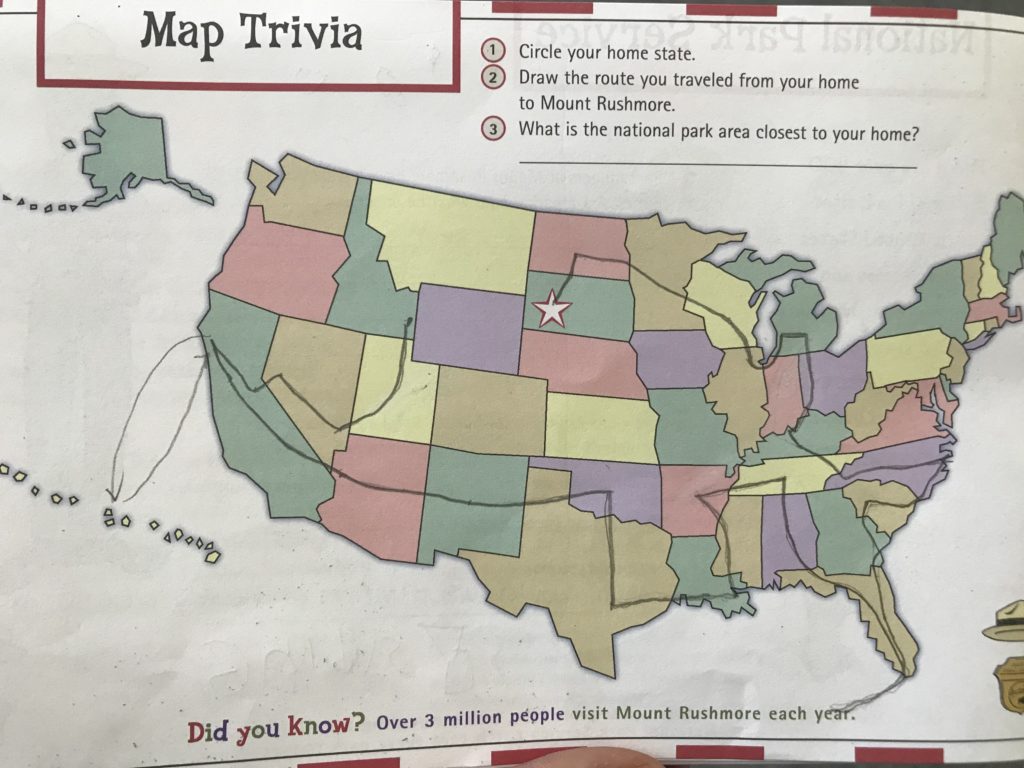 My favorite part of the day though was when the Junior Ranger packet asked Blakely what route she took to get there…..it was quite the route! Just imagine starting in Idaho, going west to California, flying to Hawaii, back to California, then traveling south-east to hit all the bottom states, slightly north to hit Mississippi, Arkansas, Tennessee, then south to Alabama, Florida, up to North Carolina, west to Kentucky, north to Michigan, west again to Wisconsin, Minnesota, and North Dakota before we hit Mt Rushmore. It was quite the trip!

Mt Rushmore is beautiful and it is worth the stop or detour where ever you may be traveling from. The monument is spectacular and stands as a symbol of those men who worked so hard to make our country a great place to live.