Mammoth Cave was our first Jellystone camping experience!  Our three girls under five didn’t know anything about Yogi Bear and Jellystone before we pulled in.  Little did they know Jellystone would soon become a favorite stop on our 50 states in 50 weeks tour of the United States.

Since we were at Jellystone we borrowed the old Yogi Bear Movie from the front desk and had a movie night within a half hour of parking the RV.  As soon as Colter pressed play, all eyes were fixated on the screen.  I was even distracted as I was preparing dinner.  The girls loved it and Colter can do a mean, “pic-a-nic basket” impersonation. 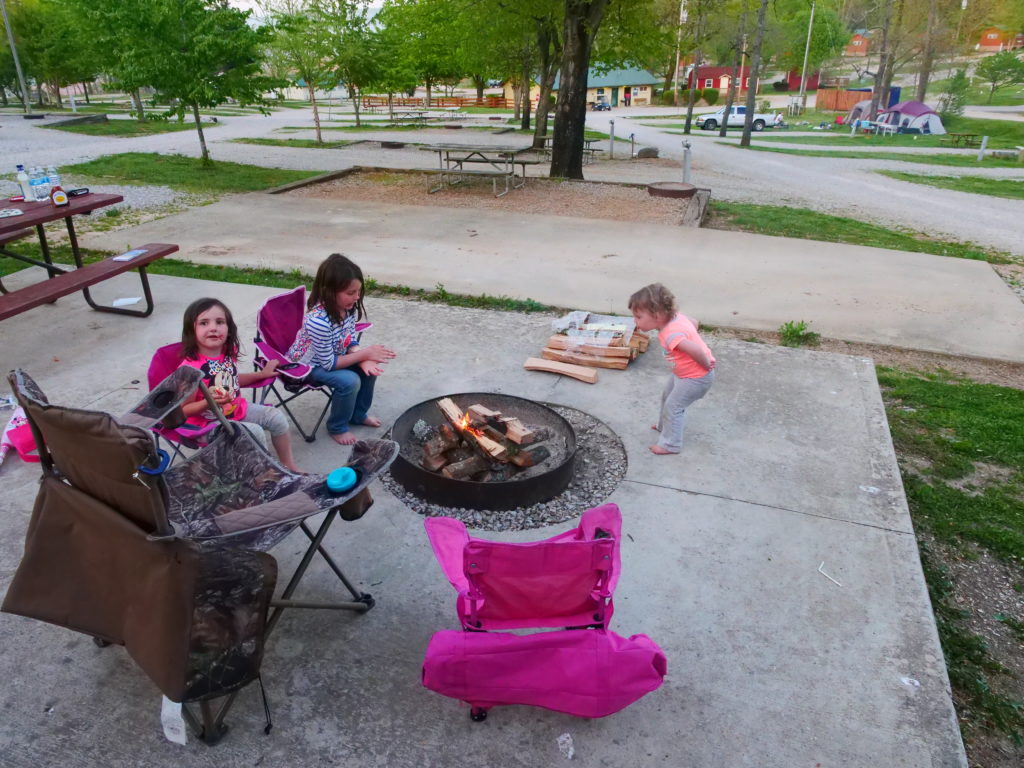 Jellystone Mammoth Cave is full of activities.  We spent two days never even leaving the property.   We spent one day in one of their two pools.  I was hoping the girls would frolic and play for a couple of hours while I sat in the shade, enjoying some downtime but that didn’t happen.  They wanted me to come play!

Bodyboards served as transportation as I pulled each one individually around the whole perimeter of the pool.  Then together like a train.  I was trying to keep out of the pool.  Don’t ask me why I got boring as an adult.  Should I call it lazy?  If I were younger I would have loved to jump in and play in the water.

Child pressure got the best of me though and I got in the water.  We had a lot of fun!

When we were finished swimming we decided we would explore the campground.  It was on our way to grab a golf cart when we saw the jump pad!

Think trampoline meets bounce house!  Epic if you are five and three (almost four.)  We played races, jumped all together and chased cat and mouse.  My calves were feeling the burn from jumping after a few lengths to the end and back.  Then I just plain old played dead! 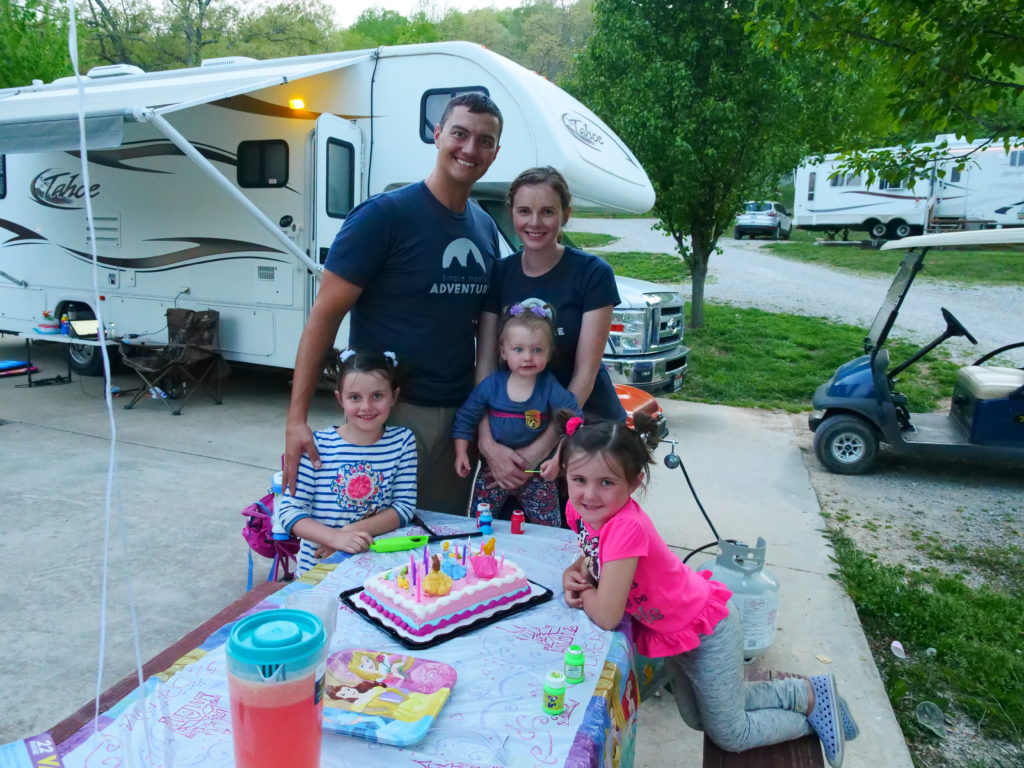 The next day was Tessa’s fourth birthday!  What to do for her birthday was a big deal for me and I was glad we ended up at Jellystone.  This was a huge blessing as I had not taken the time to plan anything out for her.  All I knew was that she wanted a Moana birthday.  Or did she?  She changed her mind three times within 20 hours!

The night before her birthday, Tessa decided she wanted Cindy Bear themed birthday instead of Moana.  Now that put a spin on things.  Pinterest was already searched for Moana ideas, now I needed Cindy Bear?  Ok, I could do a cupcake cake that looked like Cindy, maybe.

Then again maybe not!  I wanted to spend the day with Tessa and not running around getting supplies, so my next best option was getting a cupcake cake made professionally.  I called a couple of places and no luck.  One place could have but needed at least 24 hour notice.  ugghhh

Ok, a Wal-mart run after the caves was going to be my birthday plan! 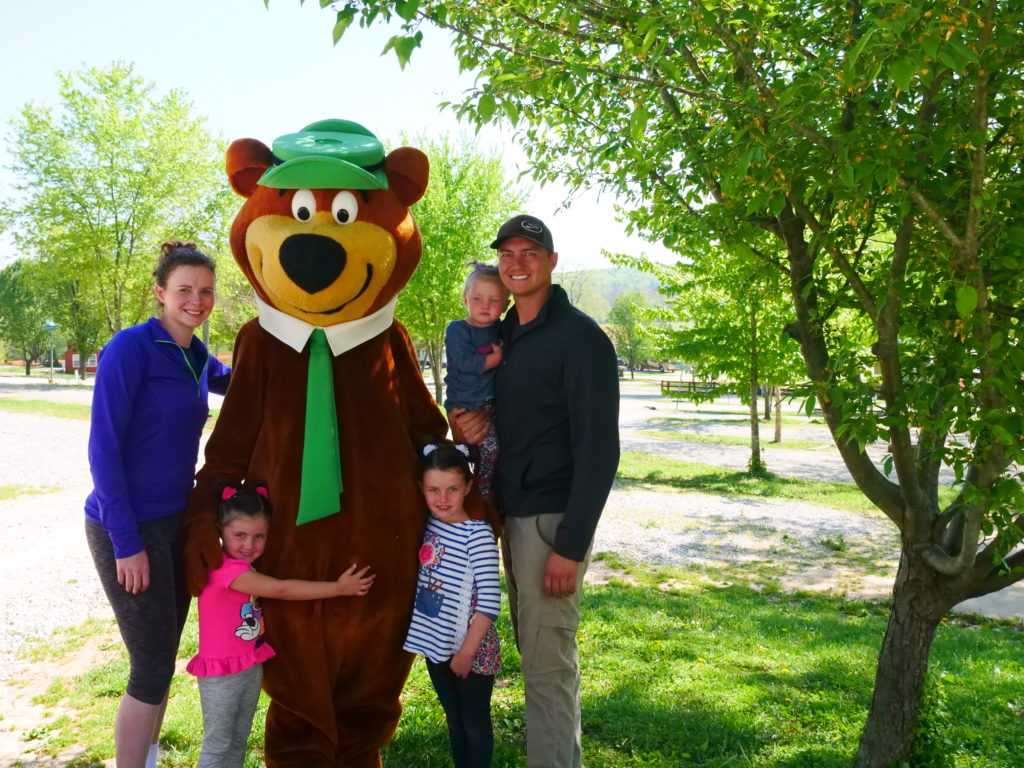 Then Yogi bear decided to show up at our campsite!  Hurray!  Tessa was so excited!  She received a special visit from Yogi.  He brought a smore’s kit and an awesome T-shirt she could color.  That shirt did not have two seconds before she and Blakely started to color in the picture.

When Yogi left, it was now time to visit the caves.

After exploring the caves we were all pretty tuckered out so I decided we would just do pizza and grab some quick decorations at Wal-mart.  Well, while we were at Wal-mart we looked at the cakes.  Lo and behold there was a princess sheet cake.  Guess what Tessa wanted now?  Yup, and princess party!  DONE!

With all of the party changes, we ended up having a mix of all three.  We had some Moana, which was a special juice drink, we had a pic-a-nic at Jellystone and we had princess decorations and cake.  We even had friends over that we met at the swimming pool the day before.  So it was a legit party!

All of the kids had a blast playing with the walkie-talkies that Tessa got for her birthday.

Miniature golf, jumping on the balance pad, and playing on the playground were a couple of the other favorite things for the girls! Leaving was not a pretty picture, the girls wanted to stay longer but the road called onward to our next destination.