Wisconsin.  What did our traveling family of five want to experience in Wisconsin.  My state planning was hardly anything by the time we crossed the border.  We had received some recommendations and then headed toward a general direction to wing it.  Little did we know how much we would find and how much our whole family would enjoy our time here touring the Jelly Belly Factory at the south, east corner, driving up and spending time splashing around in an indoor water park in the town of Wisconsin Dells, experiencing the Circus Museum and going to a car show.  Oh, and I can’t forget the deliciousness of cheese curds in Wisconsin. 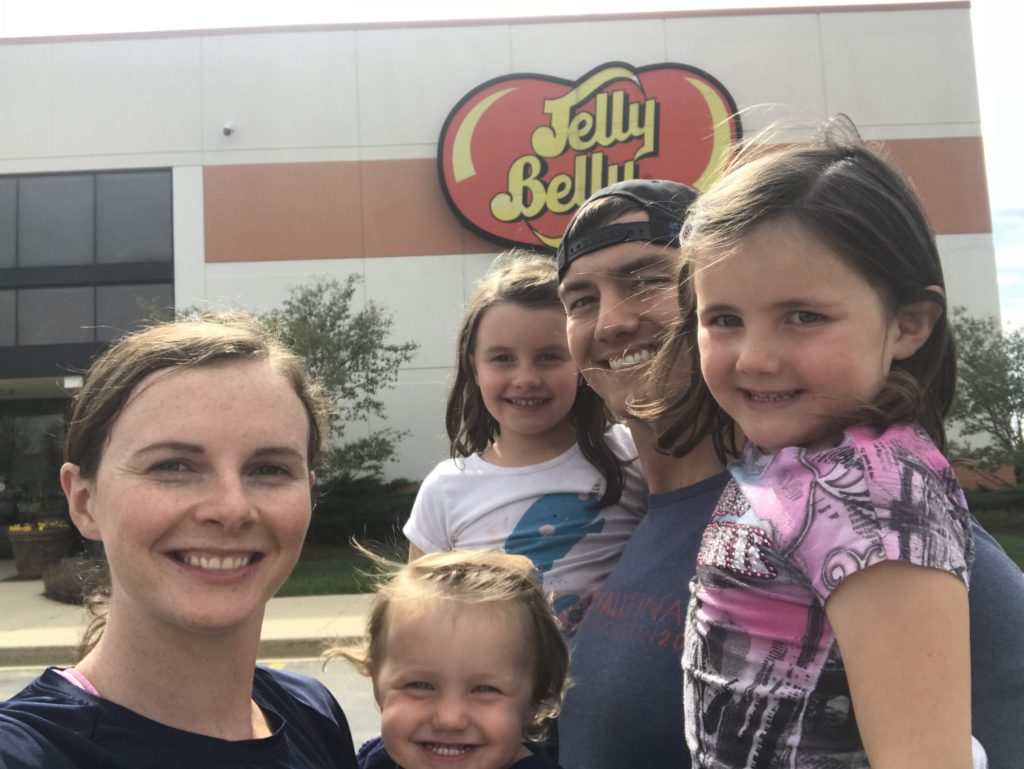 Having kids with us and being kids at heart ourselves, we couldn’t miss seeing the Jelly Belly Factory that was right on the border of Illinois and Wisconsin.  We arrived later in the afternoon and headed straight to the tour so we wouldn’t miss the opportunity.  Large Jelly Bellies were hanging from the ceiling as we walked through the doors.  The girls couldn’t stop looking at them.

There were no lines to have a tour of the facility and we went straight up to the Jelly Belly room.  In this room there are displays of old candy making equipment, a soccer game where you can block Jelly Bellies from going into the goal and a line of seven different Jelly Belly tubes where you can guess the flavor.  Candy sample in their early phases are available to try here. 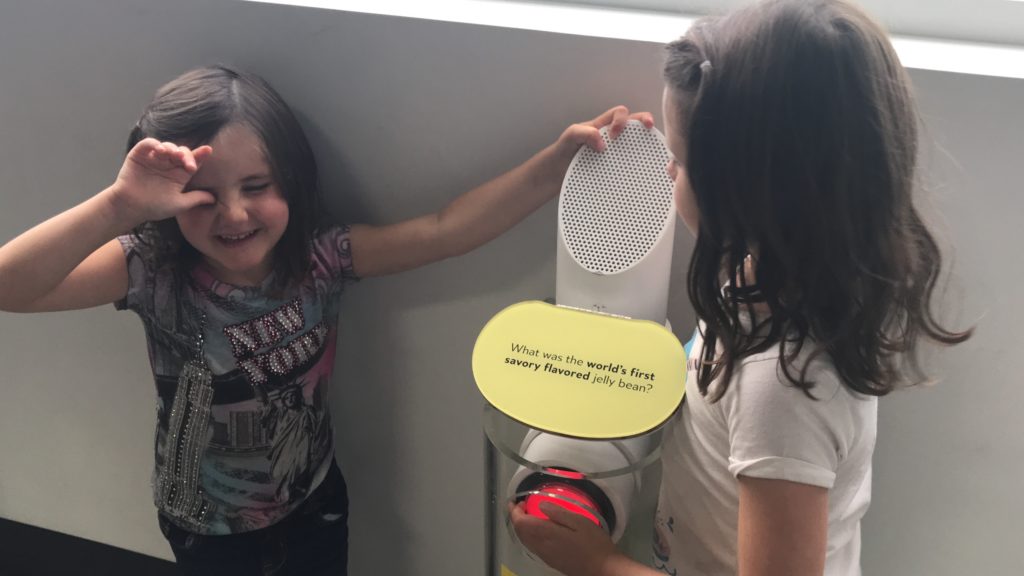 After we spent some time upstairs in the waiting room, it was now time to go downstairs again and take a train tour of the warehouse.  First, we had to get our white food hats on (which would later serve as a candy bowl) and pick our cart.  There were many to choose from as there was only another mother and child to tour with us.

Videos around the warehouse explain the history of Jelly Bellies and how one of these kidney-shaped, bundles of sweetness are made. It takes the finesse of well-trained candy makers to make them perfect!  The barrels that they use to spin the candy in are large and I had no idea they have to go through a couple of cycles to get to the finished product.

My favorite thing on the tour was seeing the artwork created out of Jelly Bellies.  Pictures, portraits, you name it, line the end of each row.  Beautiful and creative are two words I would use to describe each peace.  Could you imagine creating a piece of artwork only out of different colors of Jelly Bellies?  It is neat.

After the train tour, we took off our hats and were give a handful of little packets full of Jelly Bellies.  Yum!  Times that by five!  Right?!  Right.  Into the store we went and in the store can be dangerous.

Dangerous because they have individual flavors.  No more picking out the ones that you don’t like.  Just fill a bag with the favorites and be on your way.  One thing I forgot in my choosing was that candy pounds add up quickly.

Our bag consisted of Colter’s favorite, popcorn.  I wanted to try all the fruit flavors so I pulled the lever on about four fruit flavors.  Then the girls wanted taffy so we purchased some taffy but while we were picking out flavors lost Saylor in the Jelly Belly quarter operated car.  I left that place as fast as I could, hands full of kids and candy! 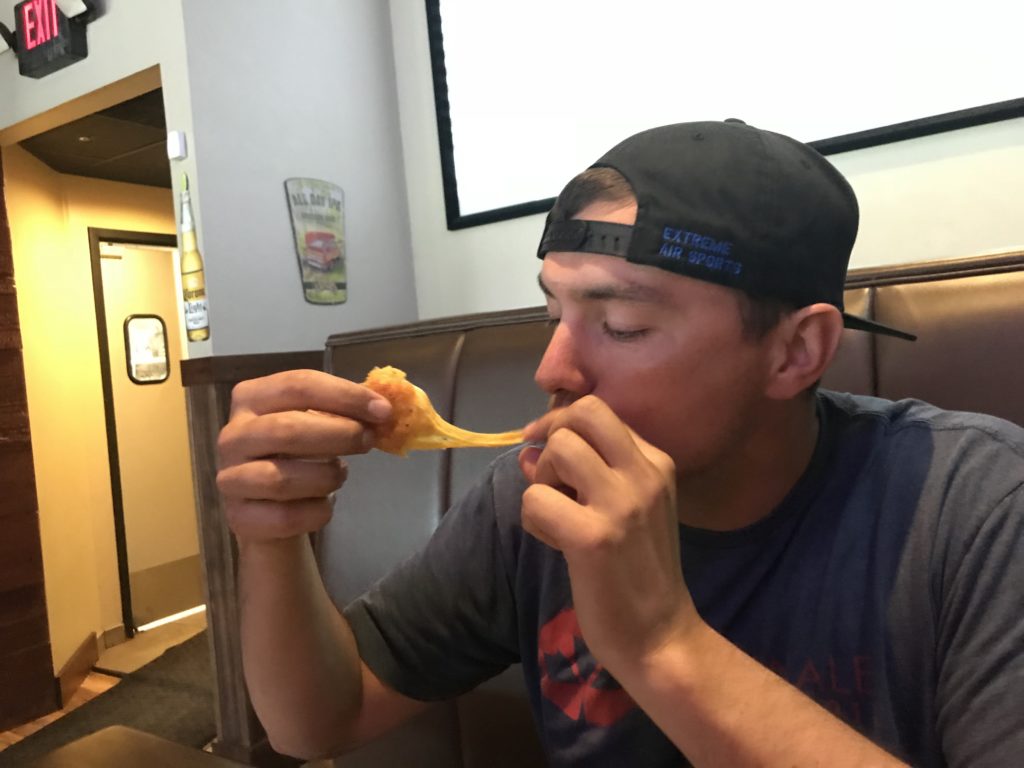 As good as the Jelly Belly Factory was and our new load of sugar real food was next on the agenda.  Thankfully we found Millwauke Burger Joint.  BEST.  CHEESE CURDS.  EVER!  We were so full from the curds we took our dinner to go.  Girls were tired anyway and we wanted to get out of the restaurant.  I wanted to stay and watch college sand volleyball!  I left with the girls to the RV and Colter waited for our food and the check.  Those cheese curds though. 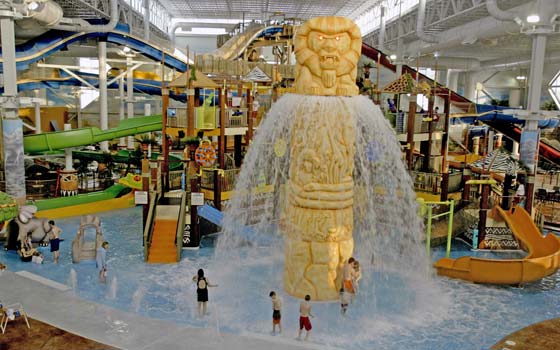 All I have to say is water park capital of the world and you will all know what I am talking about, right?  Well if you are anything like me, I had no clue.  Wisconsin Dells had been recommended to us by a couple of people so headed in that direction.  Only after some research did we find out how amazing it was going to be.

We didn’t have a place to park the RV for the night and we were getting in late after touring the Jelly Belly Factory earlier in the day. We decided to do a free night at a Cracker Barrel near an indoor/outdoor water slide park.  Bonus was that we got some breakfast there the next morning.

We had a great nights sleep, pretty quiet, but when morning came, it was time to find the best stinkin’ water park we could find.  Google searches and phone calls helped us find our answer.   Many places require a stay in a hotel to have access to the park.  A bundle as you would call it.  We didn’t need a hotel room but played with the idea of having a fun hotel getaway from the RV.  Then we found one that didn’t require a night stay.   It was the one we had parked by!

Me and the girls were ready to go but Colter wanted to come.  That meant we needed to wait.  By the time we got to the park and paid for tickets, it was the best decision we could have made and here’s why.  The tickets were discounted because they were not all day plus the indoor water park was open one hour later than usual.  We swam and played until closing at 10 pm.  It was perfect for our three littles.

They had really small water slides for Saylor’s age.  Medium slides for older kids and then the usual speed slides.  One of our favorites were the family slides.  We would get on a tube and twist and turn until we splashed safely into the water at the end of the slide.  Just sharing the experience with my kids was so fun.

Colter wanted to try one of the speed slides that spits you out into a funnel and then you spin around for a while and then drop in the pool.  He wanted me to try it.  I did.  At one point I was coming out the the tube and when I reached the tunnel, I tried to slow myself down so I could drop feet first into the pool.  This plan backfired and I quickly slipped through the exit head first.

We had a lot of fun at Kalihari Resort and liked that we were able to just drop in without a hotel stay.

Staying at the Cracker Barrel another night was an option but I wanted our own space where the girls could run and we could go on hikes.  Thankfully there was a state park pretty close which had a spot for us.  The park had sand volleyball courts, a playground and hiking trails. 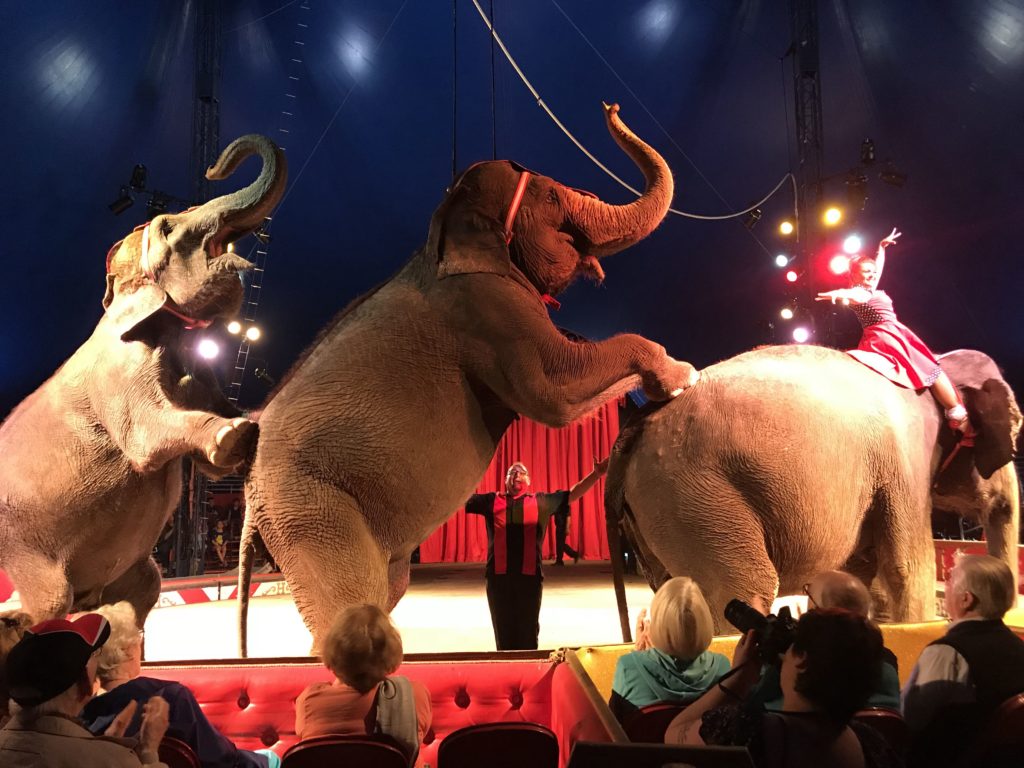 Have you seen the movie ‘The Greatest Showman?’  This is a true story of a circus showman and Ringling Town was home base for his circus.  This is where they would house and train animals to do circus acts.  Going into the museum I expected a lot of old circus artifacts but I was pleasantly surprised.

Upon purchasing our tickets a very helpful lady at the front desk gave us a map which had a schedule of activities for the day.  She mentioned to me to go straight to the big top where a live circus show would be starting in a half hour.  We took her advice and walked the half mile to the big top.

While we waited we got some popcorn.  Then the show began.  Dogs jumping through hoops, pigs standing on small pedestals, a unicycle act, elephants and trapeze was all part of the show.  The trapeze was Tessa’s favorite and she was able to give the performer a hug after the show. 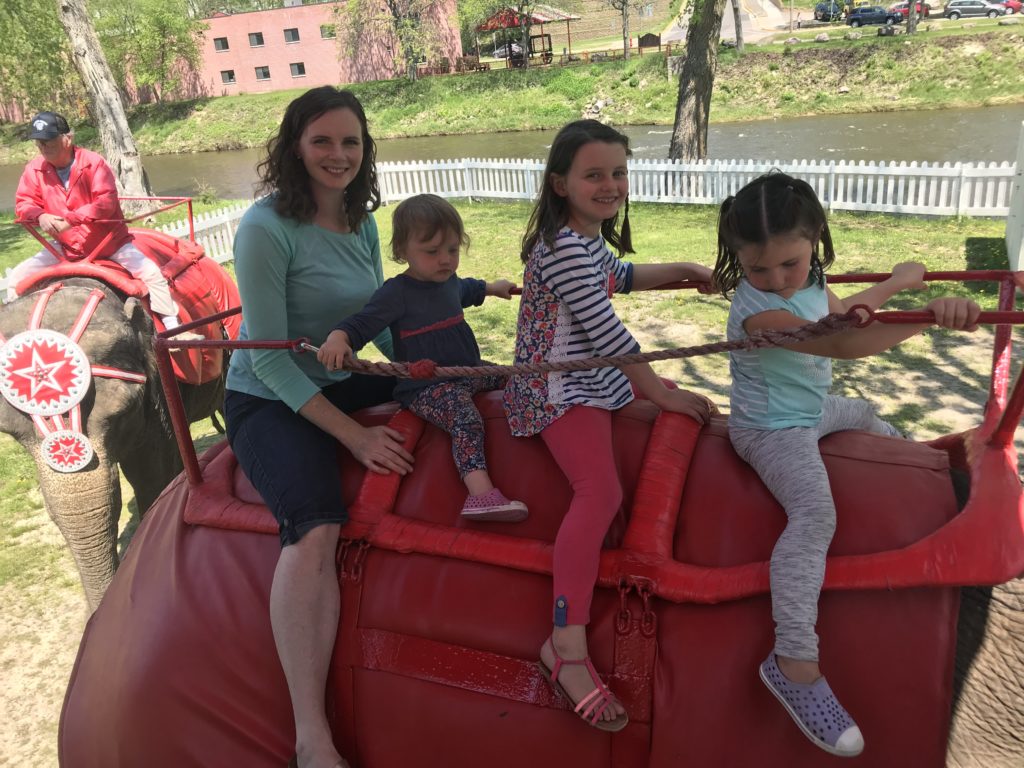 On our way out from the live show, we passed the elephant rides and pony rides.  When we were in Indonesia, five years ago Colter, Blakely and I were able to ride elephants.  I wanted the girls to have an experience similar so I pulled out the money and we were all able to ride.  The smiles on their faces said it all!

Elephant rides, Shetlin Pony rides, and the carousel all cost extra in addition to the general admission.

There are two circus wagon restoration buildings where you can step back in time and see all the bright colors they would paint the wagons.  To me it was interesting to see how the circus would move around and carry all the supplies and animals. 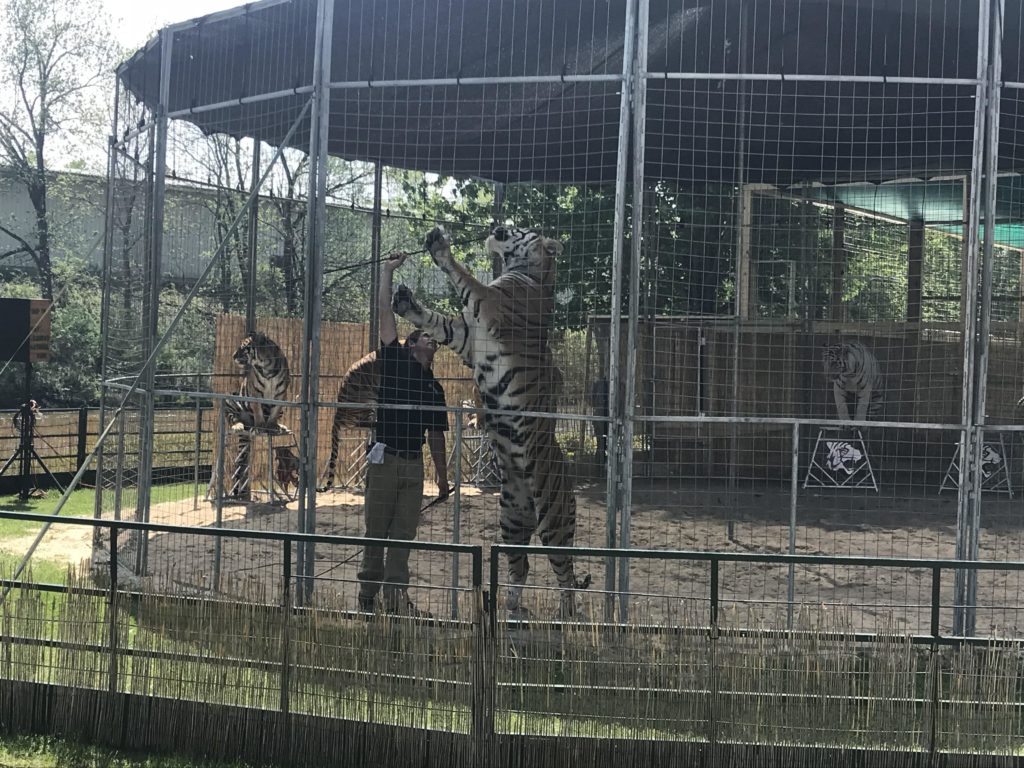 My favorite thing at the museum was to see how tigers are trained.  As the trainer was bringing them from the cages, he related them to children.  Positive reinforcement and negative reinforcement at the right time.  He had six tigers in the cage with him.   I was so impressed at the patience and skill of the trainer.

After the tiger training, the girls were so thirsty and tired, I purchased a drink and we headed out.  Unfortunately, we didn’t get to see all of the Ringling Village buildings.   We were able to stop quickly on our way out to see a short film on the showmanship of PT Barnum.  He had to be such a creative man.

On Saturday we found out there was a car show in the Dells.  Colter wanted to go.  It was a very hot day but we saw a lot of really neat cars.  There was even a camper van there on display that we thought was pretty cool.  The girl’s favorite was an actual mini car.

After a full day of looking at cars we were on our way out when we saw the firemen doing rides on their ladder.  That looked like a pretty cool view so we went to stand in line.  The firemen had to leave at a certain time and we hoped we would make it to the front of the line before they had to leave.  Call Colter lucky because we had the last ride.  All those other poor souls behind us waited for nothing.

Colter took the girls up in the basket and I stayed below to take pictures.  We would have made the basket too heavy if I had ridden and that was the last ride.  Trust us, Colter tried to talk them into ONE MORE RIDE.  It was a no go though and I was ok with not going up.

We spent one more night at the state park and then headed west.

From loading up on Jelly Bellies to tiger training at the Circus Museum we didn’t realize how fun Wisconsin could be.  If I would have really sat down to plan our week here, I really don’t believe it would have been as fun.   I just need to find more of those cheese curds!