Wyoming is full of adventure.  Both Colter and I grew up in Wyoming and we claim it to be home a lot of the time.  There is everything from Yellowstone National Park, horseback riding, razor riding, to rock climbing Devil’s Tower.  Fortunately for us, we get to do a lot of these activities when we go home to see our parents and this time was no different.  The only difference in this trip was that Colter was able to check off a bucket list item by rock climbing Devils’ Tower 867 feet from base to summit. 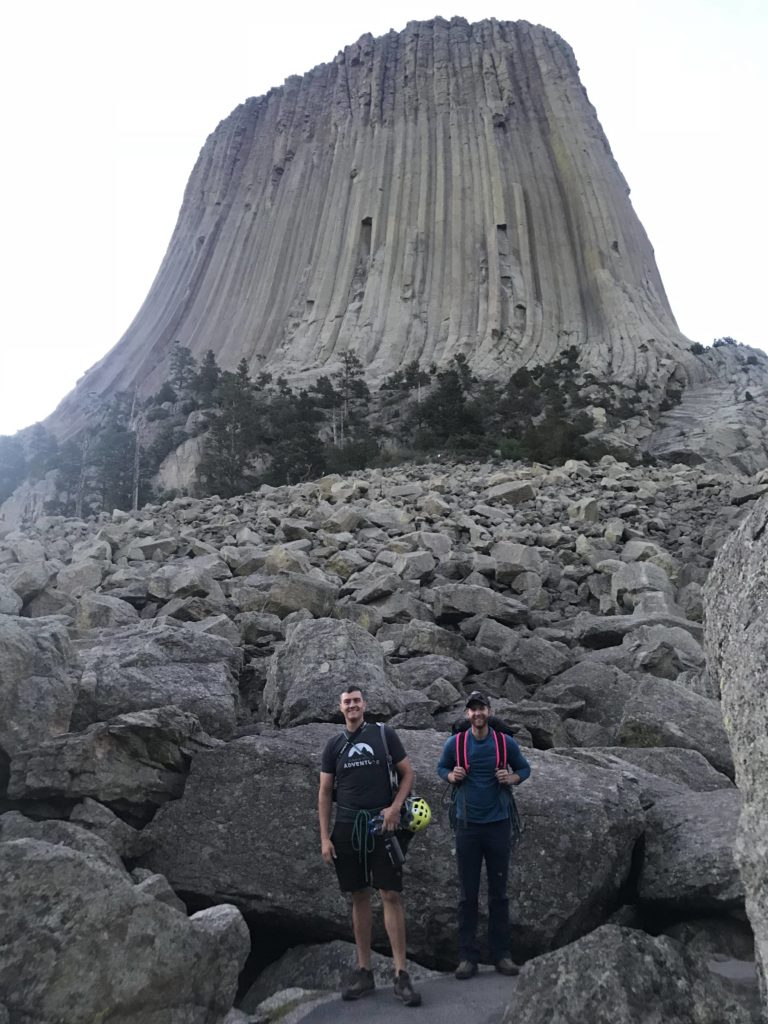 It was about three years ago when Colter and I first visited Devil’s Tower.  We were traveling with his family in an RV and Tessa was only a couple weeks old.  It was actually a huge detour from the State High School Track meet that we drove across Wyoming to see.  It was here, as we were walking around this larger than life butte that we saw rock climbers scaling the side.  For some reason, Colter thought that would be fun and put climbing Devil’s Tower on his bucket list.

Since we were heading west on our 50 states in 50 weeks tour and going to be driving right by Devil’s Tower, both Colter and I thought now would be a good time to cross an item off his bucket list.  Where do we start? We brought our climbing gear but we have little experience with trad gear, gear used to secure the climber to the rock as you climb.  Finding a guide would be the safest for Colter’s climbing experience.

Finding a guide service on such short notice would be tricky.  We were ahead of schedule and traveling through Wyoming earlier than planned. We contacted a few climbing guide companies and fortunately, we lucked out.  Colter had an appointment to climb Devil’s Tower.

We stayed at the campground at the bottom of the park which was perfect for Colter’s early climb the next morning.  Five am came early and he was off. The only thing I could do at this point was to pray he would be safe and to tell him to double check everything!

As for his personal experience, you will have to wait until he writes it.  He said it was a blast. When they reached the summit, they tethered into an anchor and sat at the edge.  Totally crazy in my opinion but I am so glad he enjoyed every minute.

When the girls woke up the day of Colter’s climb, they knew dad had gone to the mountain early.  We ate breakfast and then went outside to see if we could spot him on the side of the mountain. Binoculars would have been nice at this point.  We kept our eye on him and eventually made our way up to the base of the butte.

I could have taken the girls to walk the whole base of Devil’s tower but I didn’t want to miss Colter rappelling off the side of the 867 foot butte.  Just a short way around the trail we found a viewing scope to see the original ladder that was placed by a farmer that wanted to make it to the top.  This was right on the side Colter was climbing. The fun part was I tried recording him through that scope with my phone.  It was a challenge but we got some close-ups.

The girls were entertained with whatever they stuffed in their backpacks.  They played on rocks and had a picnic. I met a lot of new people and I was able to show them where they could see the ladder through the scope.  It is hard if you don’t know what you are looking for.

Colter was on a high when he came down!  He said it was so cool and was really glad he was able to do it.  The guide service was awesome, really nice, and have down to earth people.  Check out Devil’s Tower Lodge Climbing Guides to book your climb.

On our way to our parents’ house in Star Valley, we drove through ten sleep, another great climbing area.  It is beautiful.  The winding canyon, the raging river, and the dramatic cliffs make for a beautiful drive.

One of my sisters lives close to ten sleep.  We stopped by her house and spent a night which allowed the girls to get to know their cousins better.  Catching up with my sister and her husband was a lot of fun.  We attended an Eagle Scout Court of Honor and were planning to head to my other sisters to cheer her on in her triathlon first thing in the morning.

Well, Dave, my brother-in-law had some of his family up at the same time were there and they were into climbing.  They actually were planning on going rock climbing the next day in Ten Sleep.  After getting to know them better and spending some time with them we got the invite to come along.  It isn’t very often we go climbing with other adults who can help watch kids and set up climbing routes.  We were in.

Finding a good staging spot in Ten Sleep that is manageable for little kids is hard.  The perfect spot is a flat area close to where the adults are and away from the road.  We searched for an hour or so just trying to find a good staging area. We drove up the canyon.  In our search, we looked at our MTN Project app and asked other climbers for a good family spot.

We finally went back to the start of the climbing routes and found two great places to climb that were adjacent to each other.  Colter and I took one route to set up and the other couple took the other route.  Colter and I had a hard time setting our route up.  I am mostly a scardy cat and don’t like to fall.  I placed maybe two leads and chose to tap out.

Colter was next to try.  He placed a couple more leads but got tired.  It wasn’t like he climbed Devil’s Tower the day before.  Oh wait, he did. Then the other couple tried.  Almost got past where Colter had climbed but didn’t quite solve the problem.  We almost called it quits.

Then Colter decided to try again.  His determination and long body helped him over the top and he was able to finish out the route and set up anchor at the top.  Now everyone could climb.  Our spot was perfect. Now we had two routes set up and everyone could have the opportunity to climb.  Home alone is the climb if you ever venture out that way and it is 150 feet off the highway.

My sister came later and brought lunch and the kids under ten.  While both routes were being climbed someone thought it would be fun to get cars to honk on their way past.  So if kids weren’t climbing, they were standing behind the guardrail, pumping their arms up and down signaling the desire for a honk.  Their faces would beam from ear to ear when they would finally get a honk.

Climbing was a blast and afterward, we headed to Powell to see my other sister.

Memorial day came while we were in Powell.   A flag ceremony kicked off the day.  It was raining so they moved the memorial from the cemetery to the local Veteran’s facility.  I am so impressed with the sacrifice and service these men and women gave/give to serve our country. 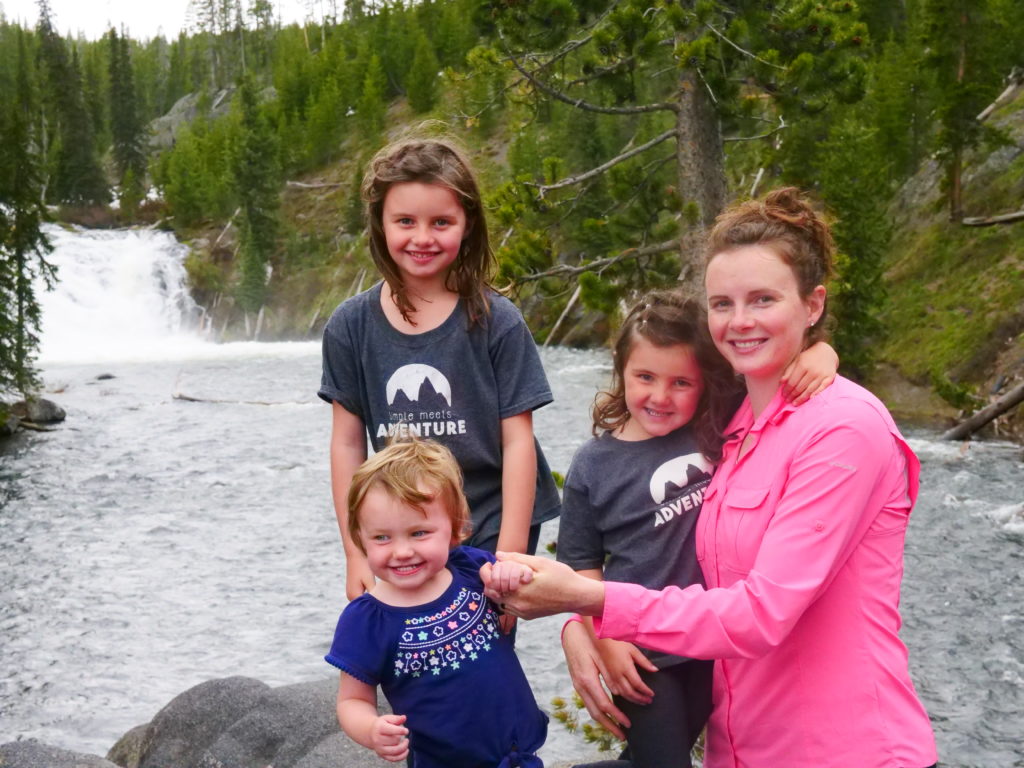 Yellowstone couldn’t be missed on our trip.  The world’s first national park is a must-see on any road trip.  There is such diversity from geysers, to rainbow pools, rivers, and mountains.  Buffalos, moose, mountain goats, and squirrels can often be seen on a drive through the park.

Due to the snow, sometimes the roads can be closed in Yellowstone.  Fortunately for us, the roads were open and clear. It was springtime and I feel we saw a lot more animals than usual.  They were all excited to peak their heads out and explore after the winter.

It would have been fun to stay in Yellowstone for a couple of days but we were chasing a cell signal so Colter could work.  We kept driving. 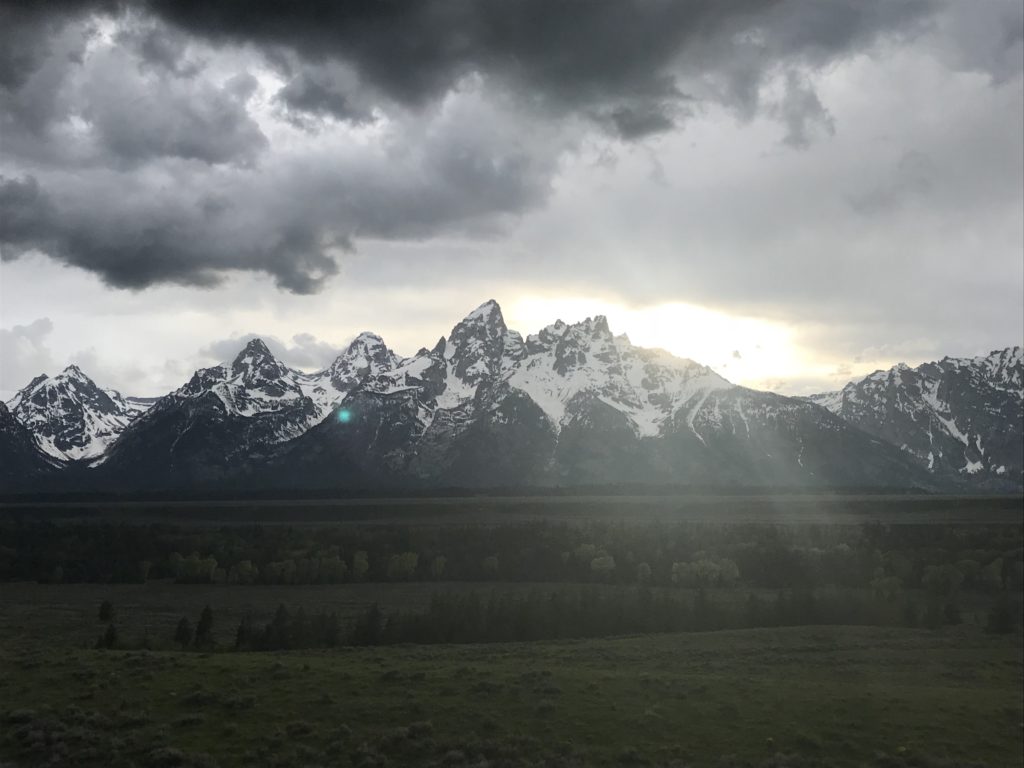 I always took the Grand Tetons for granted while growing up.  We would go ski in Jackson. It was this time, after being away, touring the country, that they truly stood out to me.  The sight was beautiful and felt like home. We were almost there.

Since both of our parents are in Star Valley, we thought it would be fun to surprise Colter’s mom.  Colter’s brother was in on the surprise and did a great job keeping her awake for when we pulled in late.  The look on her face was priceless as she opened the door to see three little grins looking up at her. 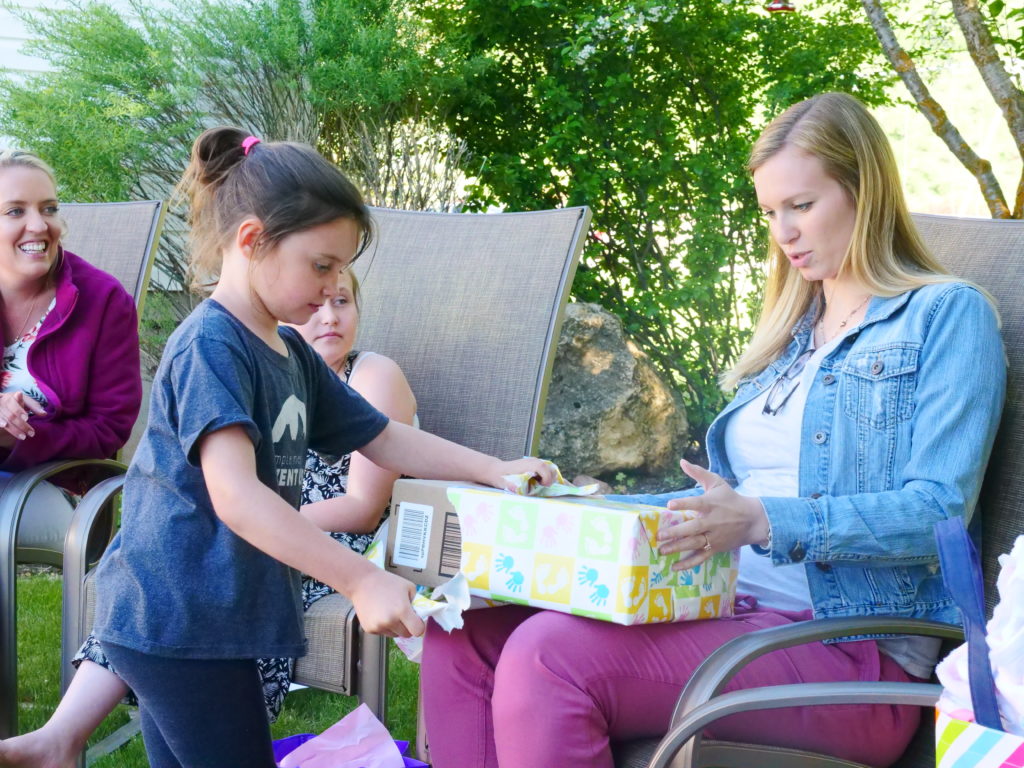 We enjoyed every minute we had with family.  The girls were able to play with cousins and friends.  We had a baby shower for my sister-in-law.  Dressing up a teddy bear in baby clothes and playing with the bottle was the girls’ favorite part of the baby shower.  We went on razor and four-wheeler rides, planted flowers, rode horses, helped vaccinate and drive the cows on the range.

Grandma showed me some journal entries while we were at her house.  There was one where she spanked Colter’s butt. It was a lot of fun to read.  She even drew a picture in her disciplining Colter.  It was cute. 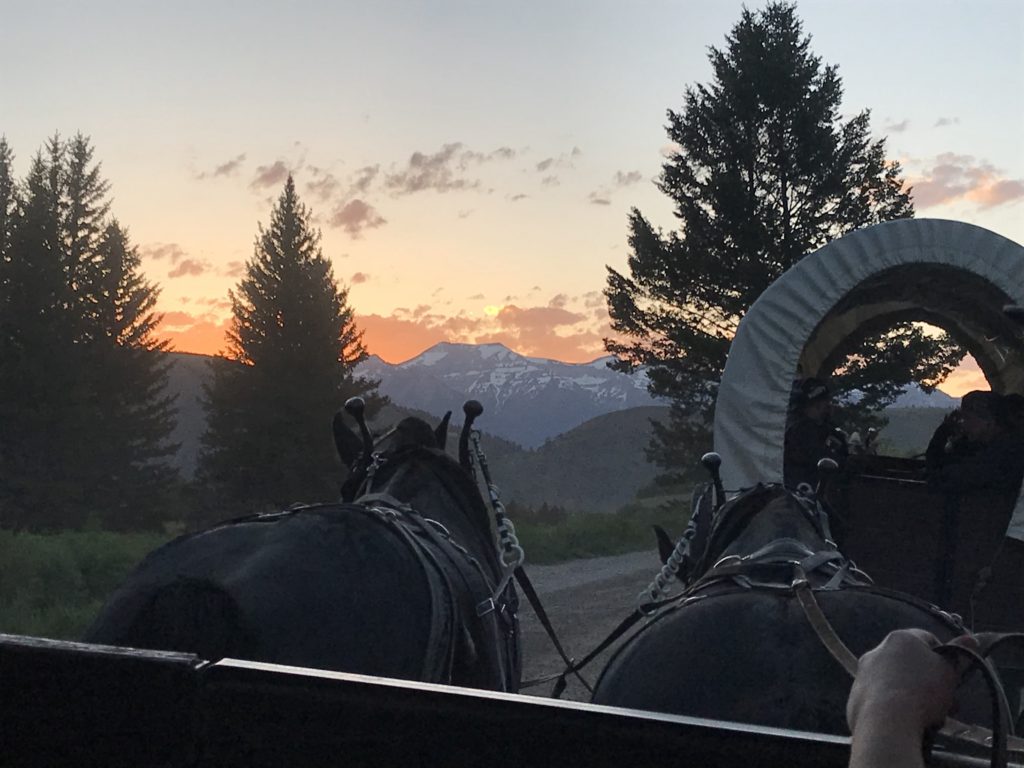 While we were in Wyoming, it happened to be our 10 year wedding anniversary.  We chose to do a dinner show at Bar T Five in Jackson Hole, Wyoming.  Riding the wagons being pulled by huge draft horses was a treat.  Colter’s sister Aubrie worked there over the summer, so she jumped on our wagon along with Colter’s parents.

The horses pulled us up a canyon and a good old-fashioned dutch oven dinner of chicken and beef, corn, potatoes and gravy, and baked beans were waiting for us.  They even had brownies for dessert.  Yum!

A cowboy band entertained us after dinner with songs and jokes.  They did a great job involving the crowd and keeping everyone smiling.  Sitting on the picnic benches, Citronella candles lit, with the woods in the background, and good old cowboy songs took me back to the wild west.

Whether you want to go back to the wild west or just have some outdoor fun, Wyoming is a great place to be.  Colter was able to check off climbing Devil’s tower, we had fun as a family going horse-back riding and visiting the intermittent spring.  It was good to be back home for a week.